Wrecking Crew is a monster truck owned by Team Scream and is driven by Chris Koehler and Kyle Garr. Wrecking Crew debuted in 2005. Before 2009, the truck was primarily an extra name for the team. Wrecking Crew was run on the original Avenger chassis and ran it from 2009 through March 2017, when the 2008 version of Avenger became this truck. The original chassis was built in 1996. In 2017, Axe debuted and is currently Wrecking Crew's alter ego.

Wrecking Crew debuted on November 19, 2005 at the RCA Dome in Indianapolis, IN on the original Avenger chassis with Jim Koehler driving.

From 2006 to 2008, Wrecking Crew would serve as a spare truck, usually in instances when a certain Team Scream truck was unable to make a show.

Wrecking Crew would enter its first full year of competition in 2009 with Jim’s brother, Steve Koehler, behind the wheel.  Both truck and driver would win that year’s Save of the Year Award.

In 2010, Wrecking Crew would receive a small update in its design, with the lettering in the logo being recolored red.  Chris Bergeron would drive the truck as an encore in Monster Jam World Finals XI, on the Brutus chassis.

In 2014, Wrecking Crew would make its first and only Young Guns Shootout appearance at Monster Jam World Finals XV.  In the following year, the truck would be one of sixteen trucks selected to compete in the inaugural Fox Sports 1 Championship Series.

In 2016, Koehler would step away from driving the truck.  XDP Diesel driver Dave Radzierez, along with John Killenger, would share driving duties for the season.

In 2017, the truck would debut a new paint scheme, featuring an updated logo and a yellow-orange gradient paint job.  Mike Thompson would also take over the driving duties for the truck as they competed in Monster Jam Stadium Championship Series 3.  After the series, the truck would receive a new chassis, being the previous Avenger chassis, as said truck received an all-new CRC chassis for Monster Jam World Finals XVIII.  In June, Wrecking Crew was initially succeeded by Axe, but would continue to run on and off on various chassis.

In 2018, the chassis would begin running as Axe full-time.  The truck would continue to run on various chassis with Chris Koehler and Kyle Garr sharing the driving duties on occasion.

In 2019, Thompson would tragically pass away on August 20, leaving Koehler and Garr as the only drivers for the truck.

Wrecking Crew at its debut show in 2005 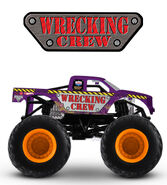