Wolf's Head is a monster truck owned by Razin Kane Monster Trucks since 2019.

Wolf’s Head was originally announced in late 2018 as the fifth truck for Razin’ Kane Monster Trucks.

Wolf's Head entered its first full year of competition in 2019 on the Ice Cream Man chassis, with Aaron Basl driving.  It competed in Monster Jam Stadium Championship Series 2, with former Ice Cream Man driver Roy Pridgeon driving the truck whenever Basl was needed to drive Devastator for the second half of the first quarter.  After the truck’s chassis was returned to running as Ice Cream Man, Wolf's Head would move to the Razin’ Kane chassis under Kristen Hope, where it continues to run to this day.

In 2020, Hope and Wolf's Head competed in the Monster Jam Stadium Championship Series Green, alongside its teammate truck, Xtermigator. 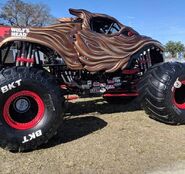 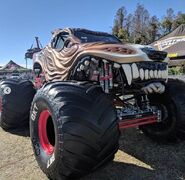