2006 was a strangely unlucky year for War Wizard. In Pontiac during qualifying, War Wizard suffered a hard landing, which in turn knocked the driver out, and caused the truck to continue forward where it slammed into the wall protection, and climbed up it. The truck was too damaged to compete in racing and freestyle, and the driver was taken to the hospital. War Wizard did not compete for the rest of the show. In Atlanta, War Wizard would suffer two separate transmission failures, requiring the full removal and replacement twice. Then in freestyle, the first hit was angled at such a way, that when the truck landed, it ripped off nearly every shock, and destroyed the chassis, putting it out of commission for the rest of the season. The team was able to buy the Total Chaos chassis and would use it for the rest of the year. On the way to Tampa, the team's rig nearly ran out of oil and even popped one of the tires. At Tampa, TG Short could not compete in Spellcaster due to a back injury, so Deric Evans stepped in to drive for Spellcaster, and when War Wizard (the body now sectioned and taped together on the Total Chaos chassis) came out to qualify, the first car stack the truck went over popped its rear right tire, causing the team to not be able to compete for the rest of the show. At the next show, a small arena show, the truck's throttle stuck during a donut, and it drove into a wall.

War Wizard after it's hard landing/crash in Pontiac 2006

War Wizard before the truck-retiring landing

A destroyed War Wizard in Atlanta. This is why the team used Total Chaos for the rest of the year.

War Wizard 2006, temporarily on the Total Chaos (Former Little Tiger) chassis. Notice the tape, used to connect the body, as it had to be cut to fit the new chassis.

Popping the tire in the qualifying round of Tampa

War Wizard on the old chassis in 2007

Being referred to as the correct "1941 Willys" as opposed to the usual fictional "2041 Willys". 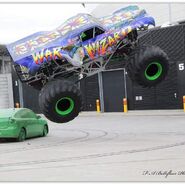 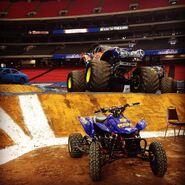