Virginia Giant is a Ford F-150 monster truck out of Winchester, Virginia currently owned by Gilbert Motorsports and driven by Cliff Vowell. The truck was originally owned and driven by Diehl Wilson from 1985 to 2019, even after the trucks sale. It is a 3 time Thunder Nationals Champion.

The first truck was a bit of a show truck with a tilt body and was painted with pin stripes along the framework, but had high performance parts due to Diehl being a truck puller running a truck called the Virginian. It was converted into a ride truck which it remains as, but Diehl is looking to locate the original body to restore it to its first look.

Diehl was one of PEI first customers, and had purchased three chassis. One was sold and became Thunder Dog, the two other remain Virginia Giant trucks, with one of them being the Ride Truck.

The retro Virginia Giant with a fiberglass body in 1997 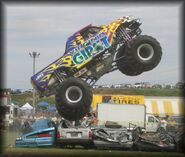 The truck's light up grill 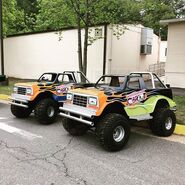