Trouble Maker is a 2010 Ford F-250 Super Duty monster truck owned by Travis Groth of Mirror Image Racing out of Washington. Since its debut in 2014, the truck has served as the primary teammate to Double Trouble, which is driven by Travis' twin brother, Tyler Groth. Similar to its teammate, Trouble Maker has also been a staple of various monster truck events across the west coast and has also competed under various identities for certain leagues, including Monster Jam and the Monster X Tour.

Trouble Maker was created back in 2014 as the replacement for Captain USA, after Mirror Image Racing’s lease on said truck would expire near the end of the season. The truck would be driven by Travis Groth. Trouble Maker entered its first full year of competition the following year, with Groth and the truck being invited to compete in the Young Guns Shootout at Monster Jam World Finals XVI.

In 2016, Trouble Maker began competing on the Monster Jam Amsoil Series West, where it would run as New Earth Authority. The truck received a brand-new chassis the following year, which was designed by Straight Up Racing. The truck would again run as NEA for the Monster Jam Triple Threat Series West. Meanwhile, the original chassis would be converted into the Monster Moose ride truck two years later.

Following the retirement of the NEA name by the end of 2017, Trouble Maker would run various identities for the 2018 Monster Jam Season. It would first run as Megalodon for the Triple Threat Series West. Later, the truck ran as Blue Thunder for select Triple Threat Series events in the summer. Meanwhile, the truck would debut a new design, featuring a grey paint scheme on a standard Chevrolet Silverado body style.

In 2019, Mirror Image Racing would no longer compete on the Monster Jam circuit and focus on more local, independent leagues, including the Monster X Tour. While competing in said league, Trouble Maker would run as Traxxas X-Maxx.

In 2021, Trouble Maker’s second chassis would be converted into Monster Moose, leaving the truck without a chassis for the start of the season. In January, the Trouble Maker name ran under Obsession Racing on the Wrongway Rick chassis. This truck would compete in Monster Jam’s Salt Lake City event, making it Trouble Maker's first appearance in said league since 2018. In July, a brand-new Trouble Maker debuted on the previous Rock Star chassis, featuring an all-new Ford Super Duty body style. The truck would also receive a brand-new rookie driver, Kelsie Thurber.

The original Trouble Maker, circa late 2014

Trouble Maker on Double Trouble, circa 2015 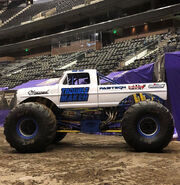 Trouble Maker under Obsession Racing on Wrongway Rick, circa January 2021

Wrongway Rick with the Trouble Maker name, circa 2021

Trouble Maker without decals, circa 2021
Community content is available under CC-BY-SA unless otherwise noted.
Advertisement