Toxic was originally created in 2010 by the Petri Brothers of Petri Motorsports out of Sardinia, New York. The truck entered its first full year of competition the following year. Travis Petri would primarily drive the truck, while his brother Larry would drive on select occasions. Under Petri Motorsports, Toxic was a major competitor during the early years of the Toughest Monster Truck Tour.

Petri Motorsports continued to own and operate Toxic for five years until 2015 when Gilbert Motorsports acquired the truck in November. It was also that year in which Cory Snyder began driving the truck. In 2017, Toxic competed in select events as part of Monster Jam Arena Championship Series 5.

In 2018, Warped Motorsports acquired full ownership of Toxic. The truck would later begin competing in Monster Truck Throwdown, and would later compete exclusively in select events in the summer of the following year due to Snyder driving for Vaters Motorsports as part of the Monster Jam Triple Threat Series.

Snyder returned to drive Toxic full-time in 2020. The truck would later return to compete in select Monster Jam shows throughout the first quarter, even winning its first overall event championship in Florence. Later that year, Toxic began competition in the Renegade Monster Truck Tour, establishing a rivalry against Zane Rettew in Stinger Unleashed. A brand-new Toxic would also debut that year, featuring a new chassis and body style.

Toxic 2.0 entered its first full year of competition in 2021, primarily competing in both Monster Truck Throwdown and the Renegade Monster Truck Tour. The original Toxic would also compete in select shows throughout the latter tour, with Cory’s father, Jay Snyder driving. The truck would also make a brief appearance at Monster Jam in Baltimore.

Toxic under Petri Motorsports, circa 2010-15

Toxic under Warped Motorsports, circa 2018-20 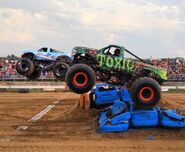