One of the most recognizable features of a monster truck are its large tires. Monster trucks use tires originally created for agricultural equipment, modified for use on monster trucks, with some tires being specifically made for monster trucks. Standard modern monster truck tires are 66 inches tall and 43 inches wide.

With the growing popularity of mud bogging in the 1970's, there began a quest to find larger, more suitable tires for increasing a 4-wheel drive pickup truck's capabilities in the mud. Early on, 48 inch agricultural tires were the standard for the few monster trucks that did exist, such as Bigfoot and King Kong, specifically the iconic design of the Goodyear Super Terra Grip tires. These tires are also known as flotation tires, as they were originally designed so that their volume of air means the farming equipment that uses them can float slightly on wet, muddy fields instead of sinking into the mud and getting stuck.

In 1979, a vehicle known as "Mud Rat" was seen at a mud bogging event sporting a set of 66x43-25 inch Super Terra Grip tires, which caught the attention of various monster truck owners, giving them the inspiration to put them on their trucks as well. On September 1st, 1982, Bigfoot 2 would make its first public appearance with a set of 66 inch Terra tires, leading others to follow suit.

One tire alone, without the rim, can weigh anywhere from 800-900lbs; when multiplied by four, tires take up about a third of the truck's average 10,000lb weight. A team can go through as many as eight tires in a single year. Tires can cost $2500-$7500 each.

Despite their size and rigidity, due to the weight of the trucks the tires tend to flex a considerable amount. This generally occurs only for a split second, but sometimes the tires flex so much that the rims of the wheels make contact with the ground. To combat this, some drivers over-inflate the tires. This, however, raises the risk of tire blowouts.

One of the most distinct elements of a monster truck tire is the tread pattern of the tire. The agricultural tires that are the basis of monster truck tires usually have a simple tread of deep, sharp V-shaped or alternating stripes (depending on manufacturer) intended to provide grip in mud or loose soil without getting clogged with earth.

For monster truck use, this tread is modified by the team, usually by removal of some rubber through "cutting". Tire cutting is done though for more than just stylistic reasons, though, as different tire treads result in different performance. Tire cutting is also done to accommodate the driver's driving skills and the conditions in which the truck will be driven. The most common modification made is to reduce the overall tread depth, which reduces weight and increases flexibility, and to round the edge of the tread near the sidewall, which makes it easier for drivers to upright the truck if they land on the edge of the tire after a jump. Cutting each individual tire takes approximately 50 consecutive hours.

A majority of trucks have their tires mounted with the tire stripes pointing downwards. On occasion, trucks may run some, or all tires facing the opposite direction. This may be for stylistic reasons, or because the backwards facing tire is an opposite side replacement for a flat.

Monster truck tires are so large with their regular tires that they cannot fit into their transportation trailers. Because of this, the tires have to be mounted on and unmounted back off after every show weekend. Much smaller tires, taken from the ones used for irrigation equipment, are put onto the truck so it can be driven back into its trailer. These are used as they can match the hubs on the large tires..

Trailers have doors on the side that allow for the tires to go in and out easily when loading and unloading the truck.

The most notable non-standard tire used are ten-foot tires: First used for monster trucks on Bigfoot 5, these were originally created for use on a US Army "land train" in Alaska.

"Plain" tires are used mostly on ride trucks, and rarely on race trucks. The most notable exception was when Predator trucks exclusively used these tires in the early 2000's.

Trucks can often times lose tires from hard hits, causing them to roll away over great distances. The large weight of the tire can pose a safety risk when this happens. In 2012, when Marc McDonald, driving El Toro Loco in Arlington Texas, lost a tire during freestyle, it bounced several times, initially in excess of 20+ feet high. It collided with the Fiesta truck and landed wedged between the truck and the wall; thankfully, nobody was hit by the tire. That was the second time that night a truck had lost a tire, a nearly similar incident happened with Bounty Hunter during that same show.

In 2015, Raging Bull lost a tire at a monster truck show and caused it to roll into a fence next to a section of spectators. The tire crashed into the fence and injured nine spectators on the other side; thankfully, nobody was killed.

In 1998, a fire burned down a garage resulting in Demon, Kimosabe, Showtime, and the Weapon 1 Ride Trucks all being destroyed. The fire was caused by tires that caught fire due to a faulty battery on a "power wheels" vehicle. The tires expanded from the heat until they violently burst, resulting in further explosions and causing the destruction of the garage. 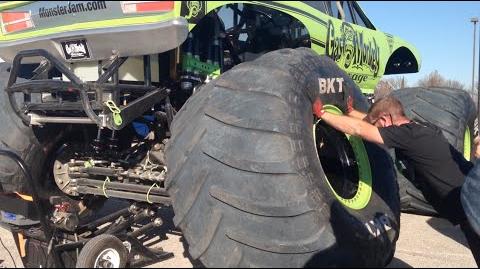 Pouncer with two front "plain" tires, one of the very few times they have ever been used on a racing truck. Also, the back tires are backwards.

Two variants of the Scaly tire on Storm Damage.

Bigfoot 5 with its notable 10 foot-tall tires.

Superfoot with a different variation of the 10-foot tires.

Sudden Impact is famous for its blue tires, made with a blue coloring instead of the regular black.

Bigfoot gets a flat tire.

El Toro Loco loses a tire in Arlington 2012. The lost tire in this photo bounced once and flew up over 20ft.

The same tire as in the previous picture bounces right over Fiesta.

Grave Digger loses a right-back tire, leaving only the rim.