Team Meents was a futuristic SUV monster truck that ran exclusively during the 2002 Monster Jam season. Tom had originally planned to debut his successor truck, Maximum Destruction, for the 2002 season, immediately after the Goldberg deal expired, but the truck's debut was delayed until 2003, out of respect, due to the September 11th attacks in 2001. Team Meents was the result of these two events. The truck is identical to Goldberg except for sporting flame decals as opposed to Bill Goldberg's tribal tattoo logos, the name change on the side, the front reading "ON A MISSION!" rather than "WHO'S NEXT?" and the back of the truck features Tom's face instead of Bill Goldberg's. Team Meents swept the 2002 World Finals, and won many events in its single season long run. Tom's most famous run in Team Meents is when he double downed at the last Monster Jam event at the Houston Astrodome (then the Reliant Astrodome). 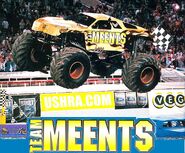 Eldon DePew's Team Meents, his name can be seen on the side 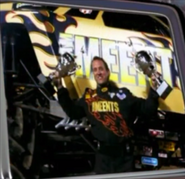 The truck at its final show 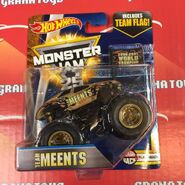 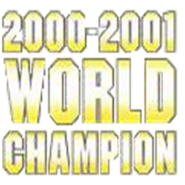 The hood logo used during the 2002 Monster Jam season.

Front clip with "ON A MISSION!"

Team Meents at Tampa Florida 2002 with a flat tire.

Team Meents at Tampa 2002 going through the mud pit with a flat right front tire.
Community content is available under CC-BY-SA unless otherwise noted.
Advertisement