Stone Crusher is a Ford Super Duty monster truck owned by Steve Sims of Monster Trucks Unlimited out of Virginia Beach, Virginia. It is primarily driven by Sims himself, although other drivers have driven the truck for select shows, including Gary Wiggins, Morgan Kane, Chad Tingler, and even his sons, Trevor and Steven. Since the truck's debut in 2005, Stone Crusher has become a staple of multiple monster truck leagues, including Monster Jam, where the truck has competed in every Monster Jam World Finals from 2008 until 2015, and has also been featured in merchandise in video games.

Stone Crusher was created in 2005 after Steve Sims purchased the original Backdraft chassis from Rick Disharoon. He would then hire Gary Wiggins, the driver of the original Mopar Magic, to drive the truck, as they both shared driving duties throughout the 2005 season.

In 2006, Wiggins would suffer a back injury following a hard landing in Pontiac, Michigan. He would make a full recovery, and continue to drive the truck until his retirement in 2008. Sims would become the full-time driver following Wiggins’ retirement, as Stone Crusher debuted a brand-new paint scheme. Both Sims and the truck would rise to stardom as they would be invited to compete in Monster Jam World Finals IX.

In 2011, Stone Crusher received a new chassis. The original chassis would continue to compete as a second Stone Crusher, with Darren Migues and Bryan Wright driving. The following year, Migues left the team to drive for 2Xtreme Racing. As for Wright, he would move to Monster Magic, while Morgan Kane, who originally drove said truck, took over the driving duties for the second Stone Crusher. Kane and the truck would be invited to compete in the inaugural Young Guns Shootout competition at Monster Jam World Finals XIII, while Sims would compete in the main field of said event.

In 2013, Kane would leave the team to drive Iron Man for FELD Motorsports, leaving Sims to campaign the name himself. Both truck and driver would be invited to compete in Monster Jam World Finals XIV. The following year, Stone Crusher ran an exclusive pink design for that year’s Monsters On the Beach event in Virginia Beach. In 2015, Stone Crusher would be one of sixteen trucks selected to compete in the inaugural Fox Sports 1 Championship Series. Sims and the truck would be invited to compete in Monster Jam World Finals XVI, which also happened to be their final appearance in the World Finals altogether. The truck would also compete in the league's Path of Destruction tour that summer, with Kevin Lewis driving the truck in Foxborough.

In 2018, Stone Crusher competed in Monster Jam Stadium Championship Series 1. The original chassis would be sold to Spain and became Race Monkey. Beginning in the second quarter, Buddy Tompkins and Cole Venard would briefly share driving duties with Sims for the time being, as his son, Trevor Sims would begin driving the truck, making his debut on July 21 in Fisherville, Virginia.

In 2021, Stone Crusher would receive an updated body style, being a 2014 Ford F-250 Super Duty. Sims’ other son, Steven Sims, would drive the truck in Greenville, South Carolina. Afterward, Chad Tingler and Charlie Pauken would take over and share the driving duties with each other for the remainder of the season. During the season, Tingler would win an overall event championship at one of the final events of the year in Bridgeport. Pauken would later leave Monster Trucks Unlimited by the end of the season to rejoin FELD Motorsports to drive Monster Mutt the following year.

Stone Crusher with a black grille, circa 2015 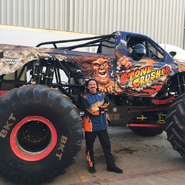 Logo, featuring the caveman character displayed on the truck's side panels