Stinger Unleashed, previously known as Stinger, is a Ford Raptor Trophy Truck monster truck owned by Zane Rettew of Rettew Motorsports from Lancaster, Pennsylvania. Since its debut in 2011, the truck has been a staple of many monster truck leagues, and currently serves as the flagship truck for both Rettew Motorsports and the Renegade Monster Truck Tour.

Stinger was built in 2011 and entered its first full year of competition in 2012.  During that year, it would mainly compete in the Toughest Monster Truck Tour.

In 2013, Stinger debuted a new green paint scheme.  Rettew and the truck would begin their first full season of competing in the Monster X Tour.

In 2014, Stinger would receive a new blue paint scheme and a new chassis, which was dubbed “Stinger 2K14.”  At the end of the year, the truck would begin competing in Monster Jam, making its first appearance at the league’s final show of the season in Trenton, NJ. Stinger entered its first full year of competition with the league the following year.

In 2016, Stinger received a new chassis, which was dubbed “Stinger 3.0.”  The truck also received an updated body style, featuring a more detailed scorpion tail plug.  Rettew and the truck would win multiple wheelie and freestyle competitions in Monster Jam, going against the likes of Pablo Huffaker and Greg Winchenbach.  In the fall, the previous chassis would be modified and converted into the truck’s teammate, Master of Disaster.

In 2017, Stinger would compete in Monster Jam Arena Championship Series #6.  Rettew and the truck would be invited to compete in the Double Down Showdown at Monster Jam World Finals XVIII.  At the start of the second quarter, the tail plug would be removed from the truck, and replaced with a standard Ford Raptor Trophy Truck bed.

Beginning in 2018, Stinger would be rebranded as Stinger Unleashed.  The truck would also debut a new paint scheme and a new PEI chassis.  Both Rettew and the truck competed in the Monster Jam Arena Championship Series, with Sean Duhon filling in for Rettew in the series’ shows in Hamilton, ON.

In 2019, Stinger Unleashed would receive an updated body style and another new PEI chassis.  The previous chassis would be converted into the truck’s third teammate, Pretty Wicked, being driven by Zane’s wife, Lindsey Rettew.  Both trucks would compete in the Monster Jam Arena Championship Series, with Zane finishing in the runner-up position.

In 2020, Stinger Unleashed would receive yet another new chassis, this time being a Cohen.  The previous chassis would serve as a new chassis for Pretty Wicked, as the latter truck’s original chassis would be converted into Bearly Tame.  The truck would run with both Monster Jam and the Monster X Tour.

Stinger Unleashed would receive its fourth new chassis in 2021, this time being a Metal Shop Signature Series chassis.  The previous chassis would become the new Bearly Tame.

As of 2021, Stinger Unleashed has run a total of seven chassis throughout its ten-year lifespan. The following table displays the list of chassis the truck has run and their dispositions following retirement:

The original Stinger, circa 2012 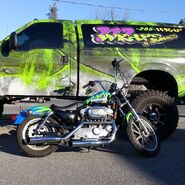 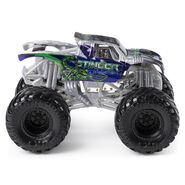