The truck only appeared during an encore performance at Monster Jam World Finals IX - alongside Backwards Bob - with Gary Porter driving. This was because several months after the World Finals, FELD received a lawsuit from an unknown party due to copyright issues with trademarking the truck's name. This resulted in the encore footage being completely omitted from all DVDs and material regarding the World Finals. Despite this, the truck would be trademarked as "Spitfire Monster Truck", and was featured under said name in Monster Jam: Urban Assault. The following year, Dragon's Breath was released under the Hot Wheels Monster Jam toy lines, which shared the same design as Spitfire, albeit with a different name. Dragon's Breath would ultimately become the new name for Spitfire, and debuted as a full-sized monster truck two years later in 2011.

Spitfire emerging from the secret container it was hidden inside of (Note: the image was edited to contain the Dragon's Breath name.)

Spitfire after the show 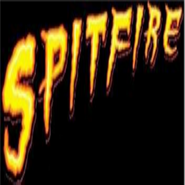