Scooby-Doo! is a custom dog body monster truck owned by FELD Motorsports and driven by Linsey Read and Myranda Cozad. It is designed to resemble the cartoon dog of the same name. The truck was announced in 2012 and debuted in 2013. Scooby-Doo! has been a part of the Triple Threat Series every year since its 2015 inception.

In 2012, it was announced that former Tasmanian Devil driver, Nicole Johnson, would drive the new truck Scooby-Doo.

In 2013, Nicole debuts the truck and competes in its first Monster Jam World Finals.

In 2014, Nicole once again makes it to the World Finals, executing a backflip during her freestyle run. This made her the third female driver to attempt a backflip. Later that year, it is announced that Bailey Shea will be driving a second Scooby-Doo in the More Monster Jam tour.

In 2016, Linsey Read joined team Scooby-Doo. Brianna Mahon competed in the East #MoreMonsterJam Tour and Bailey Shea Williams competed in the West #MoreMonsterJam Tour. Bailey Shea Williams would also be invited to the fifth Young Guns Shootout and Johnson would be invited to World Finals 17, alongside Mahon, who again drove the Madusa name. Brandon Vinson drove Brianna's truck in Germany.

In 2017, Linsey Read and Nicole Johnson left the team. Myranda Cozad joined the team and drove Scooby-Doo in the More Monster Jam (2017) West Coast Tour, alongside with Bailey Shea Williams driving the truck in the East Coast Tour. Brianna Mahon competed on the East Tour of the Fox Sports 1 Series.

In 2018, there were four trucks. Bailey Shea stepped away from driving monster trucks. Brianna Mahon also left the team to drive her own truck Whiplash. Myranda Cozad competed in the Triple Threat Central series, Linsey returned to the team to drive in a fourth arena tour. Haley Gauley competed in a stadium tour. Halfway to the tour, Steven Sims took over Haley's truck, even winning an overall event championship in Anaheim and getting an invite to Monster Jam World Finals 19. Team Scream ran a body on Axe with John Gordon driving for first quarter. The Groth brothers displayed a Scooby-Doo! body on Double Trouble for the World Finals 19 pit party. Later that year, Linsey's truck competed overseas in the European Tour. In late 2018, Haley returned to the team to compete in Glendale while Steven left to take over Monster Energy.

In 2019, only two trucks were run. Linsey competed on the Monster Jam Arena Championship Series while Myranda runs her truck on the Triple Threat Series Central Tour. John left the team and went back to driving his own truck Bad Company. Haley will leave the team to compete on the Monster Jam International Tour with Wonder Woman. Linsey wins the Monster Jam World Finals 20 Showdown championship, becoming the 24th main field competitor. She also won the Freestyle championship, making her the second female World Champion in history as well as the only driver to have won both the Showdown and Freestyle championships in the same World Finals. Mystery Machine debuts as part of the Spin Master Toyline, it is unknown if it will become a real truck.

In 2020, two trucks are run again, Linsey drove hers at the Arena Tour finishing 2nd behind Grave Digger, while Myranda ran hers at the Triple Threat West Series finishing 8th.

In 2021, Linsey made her Stadium tour debut for the Stadium Championship Series. The truck runs as a Galaxy version of Monster Mutt Dalmatian for the finale and in a non-points event in Atlanta, St Louis and East Rutherford. Mahon runs the truck for a few arena events.

In 2022, Linsey will compete in Arena Championship Series West. 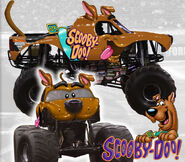 Scooby-Doo! with the eyes 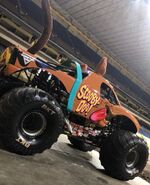 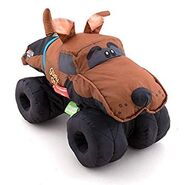 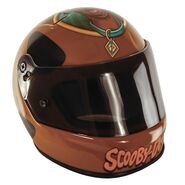 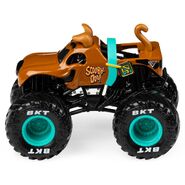