Samson is a monster truck created by Don Maples and made famous by Dan Patrick.

The original Samson was built in 1983 by Maples. He would later build a second truck but never run it, and it was sold along with the rights to the Samson name to former tractor pull driver Dan Patrick in 1988. Don had built Samson 2 based his measurments and observations of Bigfoot 7. Dan would run it as Samson, Keystone Krusher, and Coors Extra Gold before a sponsorship by the TV show American Gladiators introduced the now-common "strongarm" 3D body. After some time he sold that truck to the Race Rock theme restaurant and built a more competitive tube frame chassis. Patrick would also offer to other teams, becoming one of the industry's major chassis builders. For some time it would run almost exclusively for USA Motorsports, but later participated in PENDA and USHRA events.

Patrick later built other Samson trucks and has used several paint jobs throughout its years. In 2013, Dan Patrick retired from driving and his daughter, Allison Patrick, now drives Samson. In 2016, Allison's husband Rick Steffens started driving the truck with her. Their company/race team, PEI, is based out Circleville, Ohio. Samson is featured in Monster Truck Madness 2 and Monster Truck Madness 64.

In 2009, Samson was involved in an accident that caused the death of announcer George Eisenhart after he accidentally stepped in front of Samson while it was moving. He was taken to a nearby hospital. It is known that the show was stopped immediately after the incident, however, some sources say that George had stepped out to "close out the show" when the incident had happened, meaning the show was about to have ended anyway. The next day's show, scheduled for a Sunday Afternoon, was cancelled (despite the fact that the show 8 days earlier, involving Natural High's incident, as well as it's subsequent shows, continued) and tickets were refunded, although this did not happen until George was pronounced dead.

Due to the fact that the accident was graphic, and the fact it happened only 8 days after Natural High's accident, Monster Trucks shows were given more specific rules. 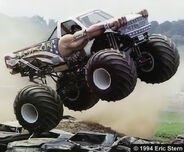 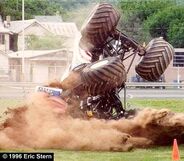 Dungeon of Doom with Samson's name. 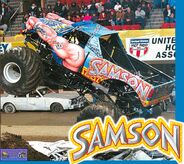 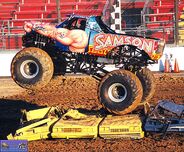 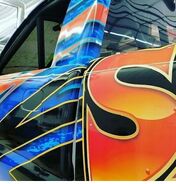 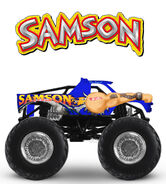 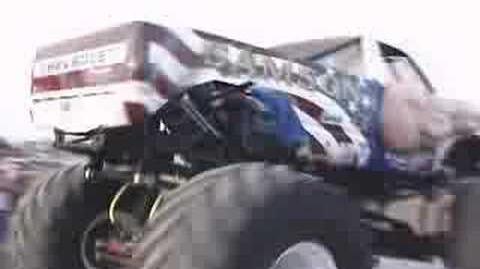