He started driving in 2010 with Monster Mutt. He drove the Retro Grave Digger (Red) in World Finals 11. He also drove Spider-Man in Mexico City and Cincinnati, and Monster Mutt in Costa Rica and Panama during the summer and won freestyle in Cincinnati and San José (friday night). He debuted Son-Uva Digger in March 2011 as part of the World Finals encore and landed a perfect backflip, which would on to become one of the most iconic monster truck moments in history. He would later make his World Finals main field debut at World Finals 13 in 2012. During the Grave Digger 30th Anniversary encore at World Finals 13, he suffered an injury and was unable to compete until November.

In 2018, Ryan won Stadium Tour 3, as-well as he won his second World Finals title at the Monster Jam World Finals 19, getting a score of 9.182 in freestyle. The same year he won the Stadium Freestyle award and the Wow Factor award.

In 2019, He drove Grave Digger #35 for Adam in Philadelphia, clinching the team the series title, He was chosen to compete in the inaugural Two-Wheel championship at the World Finals. He would also be fan voted into the first Monster Jam All-Star Challenge, getting Friday’s Racing win, the Freestyle win, and the Overall Championship.

He sets the record for the longest bicycle in a monster truck. On October 24-25, 2020, He drove Bakugan Dragonoid in Arlington, Texas for the return of Monster Jam since the COVID-19 pandemic.

In 2021, due to budget cuts from FELD Entertainment from the COVID-19 pandemic, he temporarily moved to Bakugan Dragonoid for the 2021 Stadium Championship Series, and won the championship. He would continue to drive the truck until East Rutherford, with it being his last run in the truck before returning to Son-uva Digger in the summer.

In 2022, he competed on Stadium Championship Series Yellow where he would compete strong and eventually clinch the championship during the final show in Atlanta, two shows before the series' official end. At World Finals XXI Ryan would win the high jump competition for his third overall world championship. He would also finish in the top three in all four competitions. 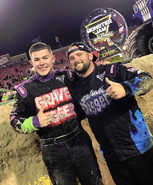