Razin Kane is a 2011 Dodge Ram monster truck owned by the eponymous race team out of Deland, Florida. It is driven by Buddy Tompkins. Originally built as a mud truck in 2008, Razin Kane was rebuilt into a full-sized monster truck in 2009, and began competition the following year. Since then, it has served as the flagship truck for RKMT, and has been a staple of multiple monster truck leagues, including Monster Jam, where it has competed in three Showdown competitions, as well as World Finals XVIII.

Razin Kane was originally created as a mud truck in 2008. In the year following, the truck would be completely rebuilt into a full-sized monster truck. Razin Kane would enter its first full year of competition in 2010 with JR McNeal behind the wheel. The following year, Razin Kane received an updated body style, being a 2011 Dodge Ram.

Razin Kane would begin competing in Monster Jam at the start of the league's 2012 season. McNeal would have a strong rookie season in the league, allowing him to win that year’s Rookie of the Year award, along with Titan driver Donald Epidendio. The truck would also compete in the inaugural Young Guns Shootout competition at Monster Jam World Finals XIII, where it would debut a new paint scheme, being black with blue flames.

McNeal and Razin Kane would experience a big slump in their sophomore season of Monster Jam in 2013, suffering multiple mechanical issues and crashes. Despite these setbacks, they would be invited to compete in that year’s Young Guns Shootout at Monster Jam World Finals XIV.

The Razin Kane name would be shelved in 2014 as the truck was converted into The Xtermigator. However, Razin Kane would return in 2015 with an all-new PEI chassis. Buddy Tompkins, who originally shared driving duties with Roy Pridgeon in Ice Cream Man for the 2014 season, would take on the driving duties.

In 2016, Razin Kane would be invited to compete in the Young Guns Shootout for the first time in three years at Monster Jam World Finals XVII, while also debuting a new "aqua" paint scheme, featuring blue flames on the truck’s standard white paint. The black and blue body would be run in select events that season, including a Monster Jam show at Wichita Falls, Texas.

Tompkins would leave RKMT by the start of the 2018 season, leaving the truck without a driver for the season. It was later announced that former 2Xtreme Racing driver Trent Montgomery would take over the driving duties, competing in the Monster Jam Triple Threat Series Central as Megalodon. Later that year, rookie driver Kristen Hope would begin driving the truck, sharing the driving duties with Montgomery.

In 2019, Montgomery would also leave RKMT, leaving Hope to assume the full-time driving duties for the truck. The chassis would be repainted and run as Monster Mutt Dalmatian for the Monster Jam Triple Threat Series East. It would also run as Ice Cream Man in Southaven, Mississippi, and as Wolf’s Head for the final two shows for Stadium Championship Series 2 in Syracuse, New York, and Philadelphia, Pennsylvania, respectively. Afterward, the chassis would be used for Wolf’s Head full-time, leaving the Razin Kane name to be shelved again for the entire 2019 season.

After a year of absence, Razin Kane would return in 2020 on the Ice Cream Man chassis. Tompkins would also return to the driver’s seat of the truck. The following year, Razin Kane would compete as a mega truck for a short period of time, even running the cut quarter panels on the normal truck for a few shows. The truck also returned to competing in Monster Jam shows, making its first stadium appearance since 2017 at MetLife Stadium in East Rutherford, New Jersey.

In 2022, Razin Kane competes in the All Star Monster Truck Tour Championship Series and finishes in second place.

The Original mud-bogging Razin Kane, circa 2008

Razin Kane before applying paint, circa 2009 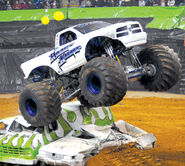 Cancelled White and Blue flame design for the 2012 World Finals

Black and Blue Razin Kane circa 2013

Razin Kane with the mega truck rear quarter panels, circa 2021 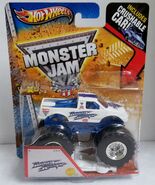 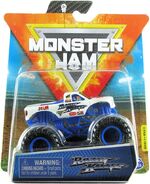