Quad Chaos is a custom ATV monster truck driven by Bailey Shea Williams and Michael Hicks but is better known when it was driven by Aaron Cain out of Attica, Indiana from 2014 till 2019. The truck is themed after the Badlands Off Road Park and is now a full time competitor for the Toughest Monster Truck Tour and Monster Truck Throwdown, and has so far had one appearance in Monster Jam. The truck's chassis was formerly the second Bad Habit by Joe Sylvester until Badlands Racing bought it in 2014. 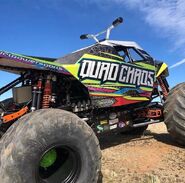 2020 body under construction
Add a photo to this gallery
Retrieved from "https://monstertruck.fandom.com/wiki/Quad_Chaos?oldid=123683"
Community content is available under CC-BY-SA unless otherwise noted.