Predator is a Custom Black Panther truck & the flagship truck driven by Allen Pezo as part of Predator Racing. Predator was one of the first 3-D body trucks and is also one of the longest running and most famous. The truck has competed in four Monster Jam World Finals events, and has been in most Monster Jam video games. Predator bares very similar resemblance and style to Prowler and Pouncer, Predator's two teammates.

Predator in 2004 on Lone Eagle 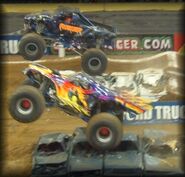 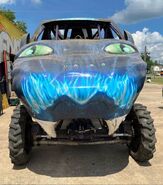 Predator 1 and the current Predator getting ready for the parade to Butler Indiana.

Predator in Atlanta in 1994.
Community content is available under CC-BY-SA unless otherwise noted.
Advertisement