Pouncer is a custom 3D Leopard monster truck as a team truck for Allen Pezo's Predator racing. The truck debuted in 2006 and has competed on and off since then.

The body style is the same as both Predator and Prowler, but it has been painted in a leopard motif.

The truck had been mostly driven by Ron Nelson up until 2015. Afterward in 2016, he would leave to re-debut his original truck Bustin' Loose.

This truck ran alongside Allen Pezo's Predator in Monster Jam during first quarter 2016. Since Ron Nelson left, it had instead been driven by Dale Mitchell. Wayne Smozanek, a driver for the truck in 2010, passed away on February 12th, 2022.

Pouncer with two front "plain" tires, Team Predator trucks are the only known racing trucks to use this kind of tire. 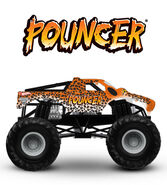