Night Life was a series of 3 monster trucks owned by Dave Wieczorek out of Grand Island, Nebraska. All three were Chevy Stepsides.

The trucks competed mainly with TNT Motorsports and ran some events on the Penda Points Series. One of Wieczorek's best accomplishments was beating the Bigfoot monster truck three times in a row.

The first truck was a short wheel base truck, it was sold and became Rocky Mountain Thunder. The second truck was built with a lower stand and longer wheel base for racing, it later became Pain Crusher. The third truck was built similar to the second but just a little longer, it became the first Tropical Thunder, and then it became Miami Thunder. Now it is Monster Egypt. 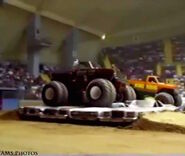 Night Life II
Add a photo to this gallery
Retrieved from "https://monstertruck.fandom.com/wiki/Night_Life?oldid=126742"
Community content is available under CC-BY-SA unless otherwise noted.