Tom Meents in Maximum Destruction earned his eighth World Championship by defeating Alex Blackwell in Captain's Curse in Racing. Meanwhile, in his third full season of competition, Damon Bradshaw in U.S. Air Force Afterburner won the World Freestyle Championship with a score of 36.

The track used for World Finals X featured a van stack with a car pad in the formation of an "X" shape, as well as a camper in the far end zone. The left side of the track featured a triple jump, along with a Jack in the Box-sponsored graffiti box van. The center of the track featured a step-up jump, which was later used as a backflip ramp for an encore. The right side featured a double-valley jump with a fountain jump in front of it. 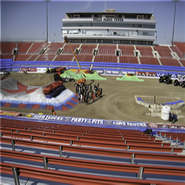 An image of the original layout for the green ramp

The paint scheme that was featured on Avenger this year was a special "Scuba" paint scheme, which was created to honor driver Jim Koehler's famous act of jumping into the fountain obstacle after his freestyle performance. Meanwhile, this event marked the first official appearance of Nitro Circus, which made its debut during the freestyle competition with Travis Pastrana behind the wheel.

Two other special trucks and designs that made their first appearances were featured exclusively in the Pit Party. The first was Obsessed, which made its official debut as the new teammate to Rick Swanson's Obsession. Meanwhile, Kelvin Ramer's Time Flys received a new black paint scheme, which was first used exclusively for this event.

An Escalade vs. King Krunch

Monster Mutt vs. An Escalade

After the freestyle competition, the car stack would be removed from the back of the middle ramp, revealing a backflip ramp. Tom Meents in Maximum Destruction would then come onto the track and attempt a backflip. While he would make a successful rotation, he would also make half of a second rotation, causing the truck the land hard on its rear and eventually crash-land on its roof. The pit party trucks would later come onto track and lap around it before the show came to close.

While the backflip portion of the encore was shown on the SPEED broadcast, the pit party trucks portion of the encore was notably never shown on neither the DVD or the SPEED broadcast for unknown reasons. Although not being shown, some driver interviews played during the freestyle DVD took place before or after the pit party encore, revealing some footage of it.