There are 6 different types of trucks in the game, each type of which comes with its own unique ability:

Only the Destruction Crew & Crazy Creatures trucks’ abilities are capable of being used in Stadium Events.

There are 5 Worlds in the game, which are accessed via the in-game world:

There are 7 different modes in Monster Jam Steel Titans 2, those being:

Similar to the original game, stadiums and arenas won't have the official names, but rather be referred to by the city from which they're located.

A Picture of the new Haunted Forest map

Avenger in-game in a new track

Son-uva Digger at The Wasteland 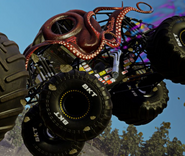 Octon8ter in game. The rear trail symbolizes the truck’s “Long Jump” ability.
Add a photo to this gallery
Retrieved from "https://monstertruck.fandom.com/wiki/Monster_Jam_Steel_Titans_2?oldid=126069"
Community content is available under CC-BY-SA unless otherwise noted.