Monster Jam is a video game developed by Torus Games and published by Activision. It was released for Nintendo DS, PlayStation 2, Windows, and Xbox 360 on November 13, 2007, and released for the Wii on November 21, 2007 [1]. It is licensed by the monster truck series of the same name, and features 20 real-life monster trucks, including Grave Digger and Maximum Destruction.

This was the first Monster Jam game to feature stadium drag racing, and to also have cross-country off-road racing in a similar vein to the previous Monster 4x4: Masters of Metal game, as well as freestyle. Like Monster Jam: Maximum Destruction, this game features commentary by Scott Douglass. A sequel to this game, Monster Jam: Urban Assault, was released in 2008.

All mode descriptions are used in-game.

In Single Event mode, the player is given the opportunity to play any game mode that they have already unlocked.

Freestyle places the player in a stadium filled with jumps and destruction.

Pedal to the metal racing in a sprint to the finish line.

Half sprint. Half endurance. All action.

No rules. No time limits. No boundaries.

Race against the clock on one hot lap.

Last truck across the line after each lap loses.

There are two 5-lap Eliminators in each region (8 total) with corresponding 3 lap Circuit Races, that are the same track in reverse.

Lap based racing against a field of opponents, each looking for the win.

The Championship mode features the player competing in a series of events on their way to the World Finals. Five different series including the World Finals to race and freestyle on different tracks and stadiums.

There are four series in the Championship mode, not including the World Finals. The Southern Series, Coastal Series, Midwest Series, and South East Series. Each containing two tracks for the Circuit and Eliminator racing modes, as well as one track for the main circuit race. Each series also contains their respective stadium events, each stadium with its own freestyle and racing events.

Compete against friends or rivals for dominance on the track.

The Nintendo DS release of the game includes 10 songs from around the time the game came out. 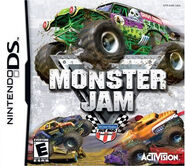 Logo textures for the trucks. Notice An Escalade's logo, revealing its original planning to be in the game.