Monster Jam is a monster truck series officiated by the USHRA and owned by FELD Motorsports. The name was first used for a USHRA event in October of 1992 and is the longest running and most successful monster truck competition series to date.

While the name "Monster Jam" was first used in 1992, not all events officiated by the USHRA (outside of Thunder Nationals) were promoted as Monster Jam events. Names such as "Power Jam", "Ultimate Thrill Show", "Grand Slam Super Series", "Motor Spectacular", and "The Superbowl of Motorsports" were used intermittently for USHRA events during the 1990's, some even into the 2000's. Some events in 1999 were even given the name "USA Motor Spectacular", following the buyout of USA Motorsports the following year, despite being USHRA-officiated events. However, these are all considered "Monster Jam" events, due to them all being officiated by the USHRA and all part of the same monster truck series.

Due to the large scope of Monster Jam's event schedule and large roster of trucks, the series has had many different tours, including a European tour, a Canadian tour, an Australian tour, a concrete-only arena tour (Thunder Nationals), a freestyle-only arena tour (Freestyle Mania), and two summer tours (Path of Destruction and the Summer Heat speedway tour). Nine video games and one mobile app have been licensed by Monster Jam and made by various developers.

Since 2001, an awards ceremony would take place either before or after the Monster Jam World Finals to appreciate the best performances, drivers, etc. from the past season

Special Recognition for Innovations in the Sport

Aside from the Ford 100th Anniversary event in 2003, Bigfoot has not competed in a USHRA-sanctioned event since the summer of 1998. This is due to a falling-out between Bigfoot and Pace-SFX Motorsports/Monster Jam that took place over the course of multiple years in the mid-late 90's. The main reasons for the falling out were disputes over pay for appearances at USHRA events, Bigfoot wanting to film their own trucks at USHRA events and have full ownership over the footage, and Monster Jam's attempt to buy the team in the same way they would buy Grave Digger later in 1998. By the spring of 1998, all of these issues led to months of debating and negotiating as to what Bigfoot's future with Monster Jam would look like, but no agreements were met and both parties parted ways for good by the end of the summer.

Despite the lack of a professional relationship, this does not necessarily mean that there is animosity between all those involved with both parties. Monster Jam-owned trucks have made pit stops at the Bigfoot compound for repairs and maintenance, and shots of Bigfoot have occasionally made their way onto Monster Jam programming or at live events. That being said, both sides go out of their way to not include each other's trucks in their videos/broadcasts as much as possible for the purposes of not paying royalties. In hindsight, Bob Chandler has stated that he most likely would not have left if he had to make the decision over again, and Bigfoot has since made multiple attempts to reconnect professionally with Monster Jam, albeit without much interest from Monster Jam themselves.

With becoming the most well-known monster truck series to date, Monster Jam has become the most scrutinized as well, and is the target of much controversy in the monster truck industry.

Monster Jam has received general criticism for the lack of crush cars and vehicles on their recent stadium and arena tracks. The act of crushing cars is often synonymous with monster trucks, so more casual or traditionalist fans tend to take umbrage with the decision to lessen their presence on tracks. In early 2019, Monster Jam declared that the usage of free-standing crush cars was going to be discontinued due issues regarding spectator safety (newer cars generate more debris). However, static crush cars that are embedded inside obstacles still remain on all of Monster Jam's current stadium and large-venue tracks.

Monster Jam has also been criticized among portions of its fan base for removing all references to guns and firearms from several trucks on their circuit, including Gunslinger, changing it to Slinger, as well as altering Metal Mulisha and Soldier Fortune to remove the guns as well. The Young Guns Shootout was also changed to the Double Down Showdown. While no official reason was given, the censorship of said imagery/references is still active indefinitely.

Most would say that Monster Jam's main attraction is the Freestyle competition, taking place at the end of every event. However, this competition has almost never been judged professionally, and with the subjective nature of scoring a truck's performance, this has led to many controversial scoring decisions and debate over what the best method for scoring a freestyle competition really is. As a result, Monster Jam would introduce JudgesZone.com in 2017, being their main scoring method for their events. Rather than a select few judges, anybody with a cellphone can visit the website and submit their own scores when prompted. An inherent issue with letting the audience score a competition is the uncertainty in voter turnout as well as biases toward more popular trucks, which is difficult to resolve.

Throughout the history of USHRA/Monster Jam events, there have been rare incidents where something has been unintentionally flung from the track into the stands and struck a spectator, whether it be a clod of dirt or a piece of shrapnel from a truck or crush car. Most of these incidents are anecdotal and haven't been discussed publicly, and none have been fatal or caused serious injury, save for one. In January of 2009 in Tacoma, Washington, a piece of the Natural High monster truck would fly into the stands during its freestyle performance and strike a small child in the head, killing him and injuring one of his parents. This incident would give Monster Jam and the sport in general a massive amount of negative publicity and lead to a major change in Monster Jam's safety policies, which would increase more and more as the years went on. Save for fiberglass damage, almost all visible forms of damage to a Monster Jam truck will mark the end of its performance. 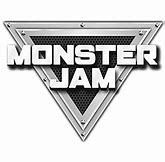 Grey version of the current logo

Version used from 2014 to 2015. However, it's occasionally used as an alternate logo at some events 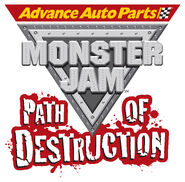 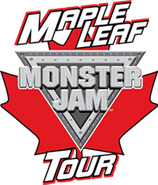 Maple Leaf Tour, used for events in Canada up to 2016 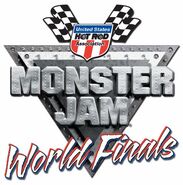