Madusa was a Ford F-150 monster truck owned by FELD Motorsports. It was driven by and themed after Debra "Madusa" Miceli. Originally created in 1999 as one of five World Championship Wrestling-sponsored monster trucks for Monster Jam, Madusa would go on to be one of the most famous monster trucks to ever be driven by a woman. The truck was also a staple and fan favorite in Monster Jam, having competed in every Monster Jam World Finals from 2000-05 and from 2009-16, while also winning two World Championships in 2004 and 2005.

Madusa was originally created in 1999 and made its debut the following year in Birmingham, Alabama with Debra Miceli behind the wheel. At the time of its debut, the truck featured a 1999 Ford F-150 body style. Madusa and the truck would later be invited to compete in Monster Jam World Finals I in Las Vegas.

In 2004, Madusa received a new design, featuring a 2004 Ford F-150 body style with an updated paint scheme. That same year, Miceli and the truck would be invited to compete in Monster Jam World Finals V, tying for the World Freestyle Championship with Lupe Soza in El Toro Loco and Tom Meents in Maximum Destruction. Madusa would win another world championship the following year, this time in racing, defeating reigning World Racing Champion Dennis Anderson in Grave Digger.

After competing in the 2006 Monster Jam season for only a month, Miceli left Monster Jam in February of that year following pay disputes, resulting in Madusa being retired for the time being. While outside of Monster Jam, Miceli would join Bigfoot 4x4, where she drove Bigfoot Madusa in the Major League of Monster Trucks (MLMT). She would later become vice president of MLMT, serving until the company folded by 2009.

Miceli returned to Monster Jam at the start of the 2009 season, resulting in Madusa being brought out of retirement with an updated design. Both truck and driver would later be invited to compete at Monster Jam World Finals X. Meanwhile, Kim Crosby would drive the truck exclusively in Panama City that year.

In 2010, Madusa would receive a special Breast Cancer Awareness-themed paint scheme as part of the encore performances for Monster Jam World Finals XI (While also running on the El Matador chassis). However, the truck would crash after hitting its first obstacle, while breaking off a wheel in the process. The truck received a new pink paint scheme the following year.

In 2014, Madusa herself was injured during the Australia tour. BJ Johnson would fill-in, even picking up a racing win in Adelaide.

In 2015, Madusa was selected as one of sixteen trucks to compete in the inaugural Fox Sports 1 Championship Series. However, Miceli would be unable to compete in Monster Jam World Finals XVI as she was inducted into the WWE Hall of Fame that same year. Meanwhile, Brianna Mahon would drive Madusa in the Young Guns Shootout at the World Finals. The truck also received a special red, white, and blue paint scheme for the event, which was not only a throwback to the previous Madusa paint scheme but also to celebrate Miceli’s fifteenth anniversary of driving monster trucks.

Throughout the first quarter of 2016, Madusa's chassis would temporarily run as Zombie under various drivers, as Miceli had suffered an injury in late January of that year. Mahon would return to driving the truck to cover for her at Monster Jam World Finals XVII. She would also drive the truck later at East Rutherford in April. Miceli would later return to drive the truck in June. Meanwhile, Madusa would compete in select European events in the fall.

2017 was planned to be Madusa’s final year of competition, as Miceli was set to retire by the end of that season. To celebrate Madusa’s “Farewell Tour,” the truck was to be given a new chrome paint scheme for the occasion. However, Miceli suffered another injury that resulted in her being unable to drive for the season. The paint scheme would ultimately be scrapped, and Madusa would ultimately be retired following Miceli’s retirement from competition. She would, however, briefly return to driving monster trucks in Australia throughout the first quarter of 2020, driving a brand-new Madusa truck for the occasion.

(Note: * indicates that the truck won the World Racing Championship).

(Note: ** indicates that the truck won the World Freestyle Championship).

The original Madusa at its debut show in Birmingham 2000 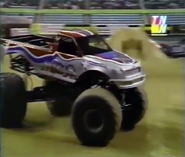 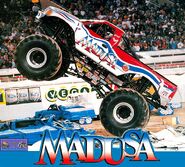 Madusa with an extended cab circa 2011

Madusa with pastel colors circa 2016 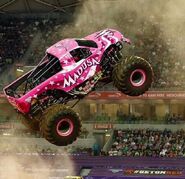 Madusa in Europe circa 2016 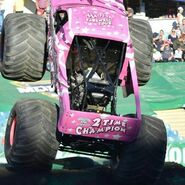 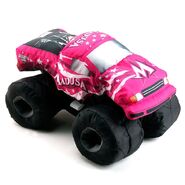 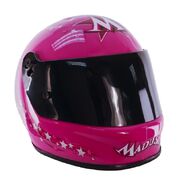