Start a Wiki
Little Tiger was a monster truck owned by Brian Barthel and participated in competition from 1995-2005. Barthel purchased Magnum Force from Don Van Loo. He then debuted the truck on a Chevrolet Silverado body and it ran until 2000, when he unveiled a new Ford F-150 Little Tiger driven by Sky Hartley. Barthel took the reigns of Little Tiger in 2004. Brian retired along with the truck near the end of 2005. The PEI chassis was sold and converted into the mega truck Young Mud; while the older chassis Barthel bought was sold to Drew Haygood and became Dream Catcher. 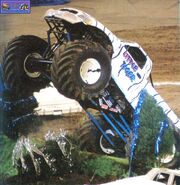 Little Tiger, with a flat tire at the 2004 World Finals. He would run black wheels from Ragin Steel for freestyle 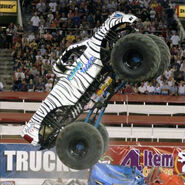 Add a photo to this gallery
Retrieved from "https://monstertruck.fandom.com/wiki/Little_Tiger?oldid=102503"
Community content is available under CC-BY-SA unless otherwise noted.