High Roller was a Ford F-350 monster truck that ran from 2002-2005. The truck is most notable for being driven by Neil Elliott and Phil Foster, and was made to advertise the Monster Jam World Finals throughout the winter season, despite not having competed at any of the World Finals events.

High Roller at its debut show in December 2001 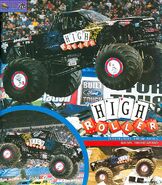 High Roller circa 2003 at Montreal

Ditto, with a Blank tailgate

The quote on the roof of the truck, which has been placed on the tailgate of the toy, which never ran on the real truck.