Gunslinger (often structured as "Gun Slinger" or "GunSlinger") is a Ford monster truck formerly driven by Scott Hartsock out of Florida. Hartsock was a staple of Monster Jam for many years and won multiple major stadium events all across the country.

The original Gunslinger chassis, without the logo 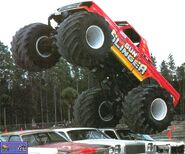 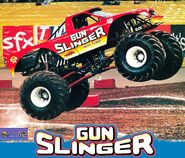 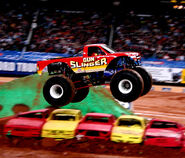 Gunslinger with the Bucked Up sponsorship Circa 2009

Gunslinger in 2012 with red rims

In an AirHogs commercial, without the logo

2012 Hot Wheels toy. This is the latest version released