FTI Torque is a 2011 Dodge Ram monster truck owned by Razin Kane Monster Trucks and sponsored by FTI Performance. It is driven by Jack Brown. Since its debut in 2018, the truck has competed in every Monster Jam Triple Threat Series from 2018-20, running identities such as Monster Mutt Rottweiler and Megalodon.

FTI Torque would unofficially debut in January 2018, running as Monster Mutt Rottweiler for the Monster Jam Triple Threat Series Central, with Jack Brown behind the wheel as the teammate to Trent Montgomery's Megalodon on Razin Kane. The body made its official debut three months later on April 14 in Knoxville, Tennessee. At the time of its debut, the truck would use the previous Xtermigator chassis. It would also use the Rottweiler body during events in the summer.

FTI Torque competed in Monster Jam full-time throughout the 2021 season and made its first (and so far only) stadium event appearance in the league at MetLife Stadium in East Rutherford, New Jersey on July 18. The following year, the name will expand to two trucks, with the second competing in the 2022 All Star Monster Truck Tour Championship Series, with rookie driver Jamie Sullivan driving. 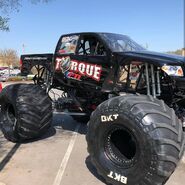 The original FTI Torque, circa 2018 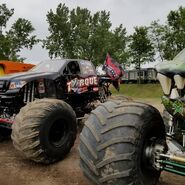