"C'mon C'mon" by The Von Bodies (FDNY vs Inferno)

FDNY was built for the East Rutherford Path of Destruction show in 2012. FDNY was driven by Max-D driver Tom Meents. The truck is a salute to the firefighters of the New York Fire Department (or Fire Department of New York officially). FDNY only appeared at East Rutherford 2012 in an encore with Inferno (driven by Frank Krmel). FDNY would follow Inferno around the track. Eventually, Inferno pulled off the track to let Meents perform a freestyle, which ended in Meents crashing. 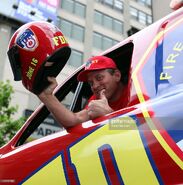 FDNY 'chases' Inferno as part of the encore 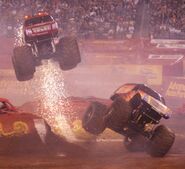 Tom Meents waves to his fans after rolling the FDNY over