Eric Swanson is a driver out of Meniffe, California who drives Obsessed. Eric is the son of Obsession driver Rick Swanson, and has been competing since 2012 with his first full Monster Jam season coming in 2014 due to age restrictions. Swanson has competed across the West Coast, and even drove Hooked for the Fox Sports 1 Championship Series when the tour came to Anaheim. In 2016 he got his first major stadium victory by winning freestyle at a San Diego show, He got his second major win in 2017, at the second Anaheim event. He was also the runner-up at the 2017 World Finals Double Down Showdown. In 2019, he competed on 2 Stadium Tours, getting a racing win in Anaheim on Feb 23. 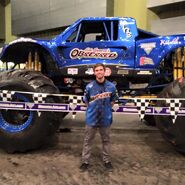 Obsessed's current body style as of 2018
Add a photo to this gallery
Retrieved from "https://monstertruck.fandom.com/wiki/Eric_Swanson?oldid=123520"
Community content is available under CC-BY-SA unless otherwise noted.