In 2008, after the debut of Spitfire, FELD received a lawsuit for the truck's name which prevented the truck from competition. The truck was later renamed "Spitfire Monster Truck" but was only used in Monster Jam: Urban Assault.

In 2009, Dragon's Breath was introduced by Hot Wheels and Monster Jam. It was visually a clone of Spitfire and also the replacement for it.

In 2010, it is announced Dragon's Breath would make its Monster Jam competition debut in 2011 driven by former Nitro Circus crew chief, Becky McDonough.

In 2011, Becky begins her first season with the truck. 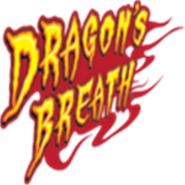 Add a photo to this gallery
Retrieved from "https://monstertruck.fandom.com/wiki/Dragon%27s_Breath?oldid=111141"
Community content is available under CC-BY-SA unless otherwise noted.