Devastator is a 2004 Chevrolet Silverado monster truck owned and driven by Aaron Basl of Double Action Motorsports out of Grand Forks, North Dakota. The truck was originally created in 1997 by Mark Schroeder out of Tucson, Arizona, also Muskego Wisconsin, who operated the truck for 23 years until his retirement by the end of 2020. Since its debut, Devastator has become a staple of multiple monster truck leagues and events held across the West Coast.

Devastator was originally built in 1997 by Mark Schroeder. At the time of its debut, the truck originally featured a GMC body style, and its chassis featured vertical front four-links, as well as having the engine mounted on the front.

In 2003, a brand new Devastator was built, featuring an updated Chevrolet Silverado body style and Racesource chassis. The truck also received an updated paint scheme, featuring a dog character on the side panels. Another paint scheme, which was designed by Hot Wheels, would debut the following year, which is still run to this day.

Beginning in 2007, Devastator ran its alter-ego, The Felon. From that moment on, Schroeder would switch between the two identities. Meanwhile, Schroeder continued to drive Devastator full-time until 2018, when he hired Aaron Basl to drive the truck after he was hospitalized in late 2017. Basl and the truck competed exclusively in West Coast events that served as part of Monster Jam Stadium Championship Series 2, as well as other events across the West Coast. During the former series, Basl would roll the truck over for the very first time during the series finale in Oakland. Schroeder would eventually return to drive the truck, with both drivers sharing driving duties throughout the 2019 season.

After twenty-five years of competition, Schroeder would retire by the end of the 2020 season and sold the entire operation to the Basl brothers, who began operating the truck under their new team name, Double Action Motorsports.

Devastator running the old body on the current chassis circa 2004 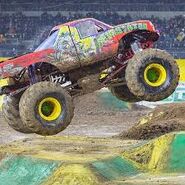