Cyclops is a Chevrolet monster truck currently owned and driven by Terry Woodcock of Freedom Racing out of Bakersfield, California. Originally created by Fred & Gary Dykman out of Tucson, Arizona in 1981, the truck originally competed as a mud truck until being illegally acquired by Robert Moore out of Oklahoma. Seven years later, Freedom Racing acquired the entire rights to the truck, and an all-new Cyclops began competition on the monster truck circuit, and ran until 2004, when it was sold to Don King. After being absent from competition for twelve years, and all-new Cyclops was constructed, and is currently in competition to this day.

Cyclops was originally created in 1981 as a mud truck by Fred & Gary Dykman out of Tucson, Arizona. The two brothers operated the truck until 1983, when it was sold to Gary Gardiner out of Bakersfield, California, who continued to operate the truck until the end of 1987.

In 1988, Cyclops was illegally acquired by Robert Moore out of Oklahoma. After Moore decided to scrap Cyclops, Jim Mace made an attempt to save the truck, with Jason Rivas supplying the money needed to purchase it. In the end, Mace was only able to acquire the frame of the truck, which he eventually sold to Jack Koberna out of New Mexico.

Seven years after the original truck’s retirement, Terry Woodcock of Freedom Racing acquired the rights to Cyclops in 1995. The truck would begin competition on the monster truck circuit later that year on Woodcock’s chassis, featuring a 1996 Chevrolet S-10 body style with the hood molded to resemble a cyclops head. Said design only ran for a year, as Freedom Racing signed a three-year contract with World Wrestling Federation in 1996. Cyclops would eventually be shelved as the chassis was used to campaign Austin 3:16 as part of the contract.

After the contract with WWF ended in 1999, Cyclops returned to competition with a brand-new design. Woodcock continued to compete with the truck until 2004 when the chassis was sold off to Rex Smith, who converted the truck into El Bandito.

Cyclops would remain absent from competition for twelve years until 2016, when an all-new Cyclops was constructed, with Woodcock returning to the driver’s seat. To add to that, Woodcock was able to acquire the original Cyclops frame, and restore the truck to its original appearance.

The original Cyclops, with the eye raised 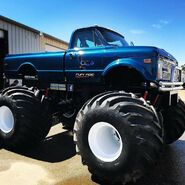 The original Cyclops after restoration

The original Cyclops on display at the Monster Jam World Finals 18 Pit Party, circa March 2017

The original Cyclops at the Monster Jam World Finals 19 Truck Parade, circa 2018

Cyclops with the eye raised

Cyclops with the eye lowered

Cyclops on another Freedom Racing chassis in Serving Sara, circa 2002 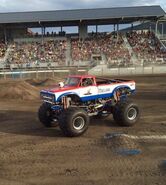 Ditto, with the eye raised