Clydesdale is a Chevy monster truck driven by Bennett Clark out of Georgia.

The first truck was a square body Scottsdale, the original name was No Respect, but changed to Clydesdale to theme it after Bennett's rodeo career.

The second truck was a custom built leaf spring frame with a stretched out front end in an attempt to add stability for racing. Its paint scheme had pink in it for the majority. It had two notable incidents where in Dallas 1990, Wild Hair hit it causing it to roll, and one where later that year a hard landing at Louisville Speedway caused the back wheel to break off.

The third truck was a tube frame truck. It too had a long front nose incorporated into the build. This truck would feature several paint jobs, as well as run as Blessed Hellride, Outlaw, Taurus, and Harvick/Kid Rock. FELD created a new paint job, but it was never used. 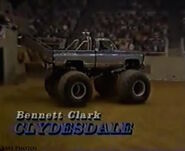 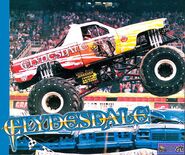 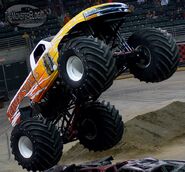