Captain's Curse was a 1941 Willys monster truck owned by FELD Entertainment and Live Nation from 2007-2016. The truck was originally owned and driven by Pablo Huffaker as the successor to his old truck Blacksmith. It wasn't until 2008 when he turned Captain's Curse over to FELD, who then placed Alex Blackwell behind the wheel.

In 2007, Pablo Huffaker debuted Captain's Curse as the new truck from his team Racesource. The truck was also the successor to his old truck Blacksmith. The truck made its first public appearance in March at Monster Jam World Finals 8, winning Freestyle with a score of 34. The truck makes it's first appearance outside of the World Finals at Santa Rose, CA on April 27, with Aaron Basl behind the wheel.

In 2008, Pablo sold the Captain's Curse name to FELD Motorsports while Racesource kept the chassis. The chassis was turned into Teenage Mutant Ninja Turtles while Captain's Curse received a new one and placed Alex Blackwell behind the wheel. The truck was also paired with Rod Schmidt's Grave Digger as its teammate. Alex would get his first invite to the World Finals, where he would the big surprise of the event, being the second fastest qualifier, making it to the semi-finals and losing to a tight race, and finally putting on a great freestyle, finishing in 6th place at the end of the night. Alex claimed he had to no complains with how the night went for him.

In 2009, the truck became well known for its infamous crash during Monster Jam World Finals 10 during the racing finals versus Maximum Destruction. The trucks were racing down Thunder Alley when the throttle on the Captain's Curse truck got stuck as it approached the turn, causing it to tumble into the stadium seats and land about 15 feet from spectators and only about 10 feet from a camera operator. It turned out that Alex had deliberately flipped the truck into the stands to avoid crashing head-on into the wall. Thankfully, the truck only landed in a section of the stands that was closed off for safety reasons. Thankfully, nobody, including Alex, was injured as a result, however, some portions of the stands (mainly fences) were damaged, but were repaired as it seems. Infamously, the crash was not aired on SPEED's episode of the show as well as its DVD release, namely due to controversy circling monster trucks after 2 unrelated deaths earlier that year. Despite FELD's attempt to censor the crash, however, it has since been uploaded to YouTube and has earned over 4 million views. Although the crash was censored in Speed in later airings of the event, it was uncensored during an international Dutch airing of the show, though this is rare footage to come by.[1]

In 2010, after two years with Grave Digger, Captain's Curse received a new touring partner, Batman. The duo would go on to win Team of the Year in 2010, despite not being independently owned. During the same year, Alex would be invited to compete at the first event at the Cowboy's Stadium (now known as the AT&T Stadium), where he would win the freestyle competition, being the first driver to win freestyle at that facility.

In 2011, Captain's Curse would continue to compete and run at shows with Alex Blackwell, including the World Finals, although the grill of the truck's Willys design was notably excluded from the truck for the year for unknown reasons. After the World Finals, Captain's Curse competed at the Lincoln Financial Field in Philadelphia, Pennsylvania. During this event before the freestyle competition, Alex and Captain's Curse did a halftime performance called "Donuts for Diabetes" where Alex was tasked to do a bunch of non-stop donuts and $500 dollars were donated to the Juvenile Diabetes Research Foundation each time he did one. Alex did a total of 39 non-stop donuts before the transmission started heating up badly. He impressively raised a total of $19,500 to the foundation.

In 2012, Captain's Curse was shelved as Alex drove the new Wolverine truck for the season. The only event the truck competed in 2012 was at the World Finals, driven by Pablo Huffaker once again. Pablo in Captain's Curse and Alex in Wolverine would ironically go against each other in Round 2. Alex would win the race and make it to the semi-finals before losing to Monster Energy. It was also featured in the yearbook.

In 2013, Captain's Curse was revived with a brand new chassis, as well as a new inverted paint scheme. Alex Blackwell also returned to the truck. The truck was originally made to debut in the 2013 season starter in Minneapolis 2012, how ever, the truck broke after its qualifying run and was unable to compete for the rest of the show. The truck was later ready for its future shows though.

In September 2015, rumors began that Captain's Curse would be retiring in 2016 after a similar, more updated truck known as Pirate's Curse, was revealed. This later proved to be false as Captain's Curse was still run in 2016 together with the latter truck.

In 2019, the truck is featured in the video game Monster Jam Steel Titans, despite being on hiatus. Alex also notably drove Pirate's Curse for a few international shows.

In 2021, the truck was later featured in the sequel, Monster Jam Steel Titans 2.

Concept art in the 2011 yearbook

The original sketch, notice how there is gold on the bed

The first body being wrapped 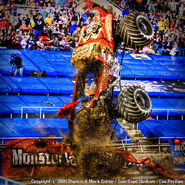 Captain's Curse, Crashing into the stands

Captain's Curse in 2010, firing the t-shirt cannon into the audience

Another view of the T-Shirt cannon, located right behind the cabin

Captain's Curse circa 2011; Grill of the truck is excluded for the year 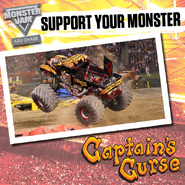 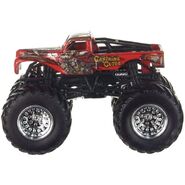 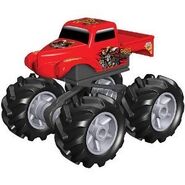 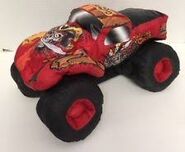 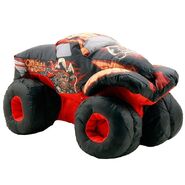