Buckshot is a monster truck owned and driven by Brandon Budd of Budd Motorsports out of Culpepper, Virginia. Since its debut in 2017, the truck has served as a major competitor in the Toughest Monster Truck Tour and Monster Truck Throwdown.

Buckshot was originally created in 2017 after Brandon Budd purchased the previous Western Renegade from Barry Parkin. The truck would begin competition later in the year. The following year, Buckshot debuted its first alter-ego, First Response. Meanwhile, the truck competed in the Toughest Monster Truck Tour, and later Monster Truck Throwdown.

In 2019, Buckshot received a new paint scheme. An all-new Buckshot debuted the following year, featuring a 2010 Chevrolet Silverado body style on an Eddie Majka chassis. Meanwhile, the previous chassis would be sold to Culture Shock Racing, and the previous Hummer design would still be run on and off by the team, even to this day. In February, the truck would debut another alter-ego, Wasted Nites, which would be used exclusively in Monster Jam events. Buckshot would also compete as Gold Digger for several Monster Truckz shows.

In 2022, Buckshot will run as Bigfoot for the Toughest Monster Truck Tour.

The original Buckshot, circa 2017 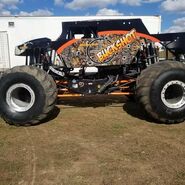 Buckshot with the original Hummer body on the current chassis, circa 2020