BroDozer is a diesel-powered monster truck owned by DieselSellerz. The truck was announced in 2017 and was supposed to debut in January 2018 with Colt Stephens driving. However, because of numerous problems with the trucks engine during development, the debut was delayed which ended up with Colt driving Zombie instead.

The truck debuted in Nashville, TN on June 23, 2018 with Heavy D driving.[1] Colt and Diesel Dave have been advertised to drive the truck on a rotational schedule with Heavy D, although Diesel Dave has now moved onto the team truck, BroCamino.

It was made in partnership with the people behind the Discovery Channel show Diesel Brothers alongside Grave Digger driver Adam Anderson.

In 2019, the team competed in Stadium Championship Series 2. At Anaheim, in show 1, Heavy D completed the first in competition backflip in a diesel powered truck, and at the second show Diesel Dave completed the first consecutive backflip. Heavy D would eventually be invited to World Finals 20.[2]

On Memorial Day on May 27, 2019, BroDozer completed a world record by jumping over a flying airplane.

In an episode of Diesel Brothers, it was stated multiple times that BroDozer would be the very first Diesel engined monster truck. However, this was proven false as the Hushpower Diesel truck ran by Dave Radzierez debuted all the way back to 2007 followed by Airdog Diesel in 2010 and XDP Diesel in 2011 all of which was run on Diesel and all owned by Radzierez. On top of that, he created Xtreme Diesel, a standard methanol engined monster truck, in 2017 in order to be able to perform in Monster Jam.

On July 27, 2018, only 34 days after the debut of BroDozer, Radzierez built a modernized diesel engine similar to BroDozer's and installed it into Xtreme Diesel in response to the controversial call. However, this version of Radzierez' truck never competed in Monster Jam hence, BroDozer became the only Diesel powered monster truck to compete in the said league.

Radzierez immediately left Monster Jam with reasons still unknown, most likely, because of Monster Jam advertising BroDozer to be a unique, diesel engined powered truck and running Xtreme Diesel alongside would disrupt the whole concept.

During an episode of Diesel Brothers, Heavy D acknowledge the existence of other diesel trucks, but stated it had never been done in Monster Jam. FELD and the Brothers have also attempted to clarify by referring to it as the first diesel powered Monster Jam truck.

A lot of criticism was pointed towards the Diesel Brothers Monster Jump Live when BroDozer jumped a plane on Memorial Day. One of the angles of the jump shows that the plane came in a little early before BroDozer even jumped with some fans calling it, "A waste of time" or "nonsense",. But regardless of what people say, BroDozer did the impossible of jumping over a flying airplane and completing a world record.

On March 11th, 2020. A lawsuit was then filed on the Diesel Brothers for modifying trucks that were polluting Utah's air. 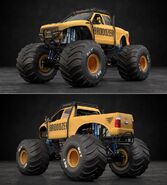 Render of the cancelled logo design

Render of a different design

BroDozer during testing. Notice the exhaust coming from the left side of the truck rather then the middle

BroDozer as it appears during competition, without the rollbars

its consecutive backflip at anaheim

The Special Discovery channel version of BroDozer used at the stunt

The Discovery channel version of BroDozer after landing

BroDozer at the All-Star Challenge. Notice the bumper guard that was added to the front of the truck at this event

circa 2020 under Colt Stephens 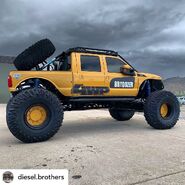 The real BroDozer crushing a car 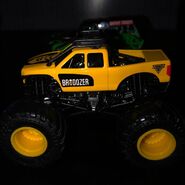 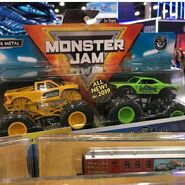 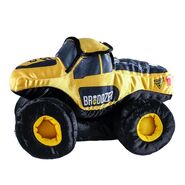 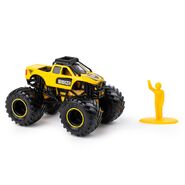 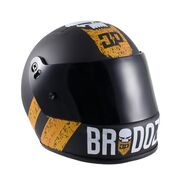