Brandon Derrow is a driver out of Elkton, Virginia best known as the driver of Bad News Travels Fast.

In late 2011, Derrow bought the truck from former owner Bruce Haney, and then gave the truck a new wrap.

Derrow's first big shot on TV came in 2015 during the Fox Sports 1 Series (2015), despite not getting an appearance in the World Finals.

In 2016, he debuted the green Bad News Travels Fast and drives in arenas.

In 2019, he runs on the Monster Jam Arena Championship Series with a new paint job. 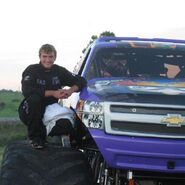 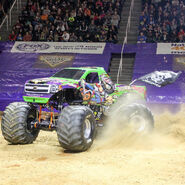 Add a photo to this gallery
Retrieved from "https://monstertruck.fandom.com/wiki/Brandon_Derrow?oldid=102294"
Community content is available under CC-BY-SA unless otherwise noted.