The truck started out as a sponsor for Built Ford Tough for more than a decade, before being turned into a full time Monster Jam concept truck in 2013. The truck has also a stacked driver list from its past including Monster Jam Superstars like Linsey Weenk, Tony Farrell, and Todd LeDuc.

Blue Thunder debuted (with an unfinished paint job) on January 6th, 2001, at the Houston Astrodome, originally as a Ford F-250. It was driven by former Grave Digger driver, Lyle Hancock, who drove Wrenchead.com the previous year. He made it to the World Finals Championship Race in Monster Jam World Finals 2, making him the first Grave Digger driver to make it to the finals; but because Blue Thunder flipped over at the end of the final race with Goldberg, it couldn't return for freestyle.

A year later in January 2002, at the Pontiac Silverdome in Pontiac, MI (the first stop), Tony Farrell drove the truck and competed there. He had an awesome freestyle run but ended with a spectacular crash.

Lyle Hancock would drive Blue Thunder again and compete at Monster Jam World Finals 3 (but would miss out on racing due to mechanical problems) and 4. In 2004, Tony Farrell and George Balhan took over driving duties as Lyle retired from the sport in late 2003.

In 2005, Norm Miller (previously a driver of Blacksmith) became the team's second driver when Balhan left the team to drive the Escalade monster truck. At the World Finals, Farrell got a 31 in freestyle, but lost to Jimmy Creten in the Bounty Hunter via tiebreaker.

In 2006, Miller retired from the sport leaving Farrell the only one left in Blue Thunder. (Miller would eventually return in 2011, driving Batman.)

In 2009, Frank Krmel replaced Farrell in the summer

In 2011, Ford had officially ended their Built Ford Tough sponsorship contract with Monster Jam, so the truck continued to run with all Ford references on the truck removed: The Build Ford Tough logo on the hood was replaced with the words "Blue Thunder" as they were seen on the side. Despite Ford being removed as sponsor, the truck still ran a Ford body and continues to run it to this date. That same year, both Linsey Weenk and Frank Krmel left the Blue Thunder team, so Todd LeDuc drove Blue Thunder for the rest of 2011 as Weenk ran his new truck Lucas Oil Crusader while Krmel joined the Advance Auto Parts Grinder team.

In 2013, Blue Thunder was resurrected with a brand new chassis and design, with Dan Evans driving the truck until 2014.

In 2014, it was announced that Dalton Millican would be taking over the driving duties and run on the #MoreMonsterJam tour for the 2015 season.

In 2015, two Blue Thunder drivers, former driver Tony Farrell and driver Dalton Millican tragically pass away; Farrell from an SUV accident at a concert and Millican from a motorcycle accident. After Millican's death, Alx Danielsson drives the truck during one event as a fill-in driver. Also, less than a six months before his death, Millican and Blue Thunder were invited to the Monster Jam World Finals 16 Young Guns Shootout, although did not win.

In 2018, Matt Cody runs the Blue Thunder body on the Iron Warrior chassis again for the Monster Jam Triple Threat East Series and competed in the Monster Jam World Finals 19 Double Down Showdown. Travis Groth would later take over driving duties of the truck by running the body on the Trouble Maker chassis for the 3rd quarter of Monster Jam.

In 2019, Matt Cody drives the truck yet again on the Triple Threat Central Tour. Matt was invited to the World Finals Speedsters championships, and won the Obstacle category, getting the truck’s first World Title.

Trucks That Have Run as Blue Thunder

Blue Thunder being lettered for the first time

Blue Thunder at its debut show without the lightning bolts

Balhan's Blue Thunder in 2004 without the bed fender

The display Blue Thunder in 2008

Blue Thunder circa 2011 without the Ford sponsorship

Blue Thunder before adding the logo

Blue Thunder's original render for it's re-debut in 2013

Blue Thunder on The Patriot's chassis.

Blue Thunder on a Racesource Chassis in 2013 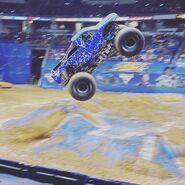 Blue Thunder on a black chassis in 2015 for an interview.

circa 2016 on Metal Mulisha

The censored Blue Thunder for the 2017 Saudi Arabia event 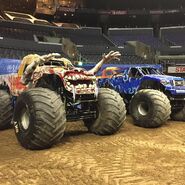 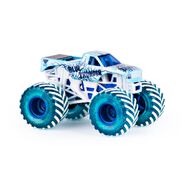 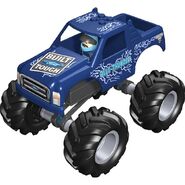 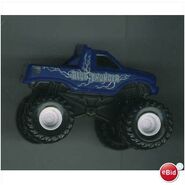 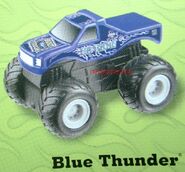 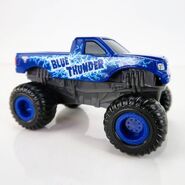 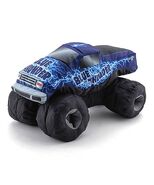 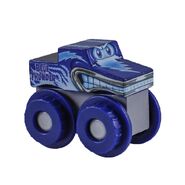 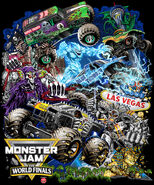 Blue Thunder’s Truckin’ Pals Bio
Add a photo to this gallery
Retrieved from "https://monstertruck.fandom.com/wiki/Blue_Thunder?oldid=110156"
Community content is available under CC-BY-SA unless otherwise noted.