Black Stallion is a 2008 Ford F-150 monster truck owned and driven by Michael Vaters of Vaters Motorsports from Hagerstown, MD. Since its debut in 1981, Black Stallion has been one of the longest-competing monster trucks. It has also been a major staple of the Thunder Nationals, having won four series championships, and has competed in five Monster Jam World Finals.

Black Stallion was originally built in July 1981 as a street-legal truck before being rebuilt into a full-sized leaf-spring monster truck.  At the time of its debut, the truck originally performed in car-crushing exhibitions along the east coast before beginning competition in monster truck shows in small arenas and fairgrounds.

In 1991, Vaters heavily modified Black Stallion to accommodate a tubular lower frame.  The truck continued to compete in small arena shows and select events in the PENDA Points Series.

In 1996, Vaters would build a brand-new chassis, which would be dubbed as Black Stallion 2000. Later, both truck and driver began competing in the Thunder Nationals, where they would rise to stardom. They would eventually win their first series championship in 1999.  That same year, Black Stallion would successfully jump over another monster truck, making it the first one to do so.

The 2000s was arguably the most successful period for Black Stallion. Vaters and the truck became main competitors in the Thunder Nationals and would win multiple championships.

In 2001, Vaters and Black Stallion would be invited to compete in Monster Jam World Finals II. Despite being eliminated in Round 1 of racing by Brian Barthel in Wolverine, the truck finished eighth in freestyle.

In 2002, Black Stallion celebrated its twentieth anniversary, and debuted a brand-new design, featuring a cartoon stallion along with a yellow-orange-black gradient on the side panels.  Vaters and the truck would again be invited to compete in Monster Jam World Finals III.  Despite being disqualified against Dennis Anderson in Grave Digger for red-lighting, the truck would finish fifth in freestyle. That same year, Black Stallion would again successfully jump over another monster truck, this time in reverse.

In 2003, Black Stallion would be invited to compete in Monster Jam World Finals IV. Despite crashing in racing after being eliminated in Round 1 by Scott Hartsock in Gunslinger, the truck would again finish fifth in freestyle.

In 2005, Vaters and Black Stallion would be invited to compete in Monster Jam World Finals VI.  For that occasion, the truck ran special yellow wall tires, and would specially be signed by fans during the Pit Party.  The truck would also win three Thunder Nationals series championships straight, from 2005-07.

In 2007, a brand-new Black Stallion debuted, featuring an updated paint scheme and a new chassis.  The original chassis would serve as a new one for the truck’s teammate, Iron Warrior.

In 2011, Vaters established a partnership with Safety-Kleen Products.  As a result, Black Stallion debuted a new Safety-Kleen-sponsored paint scheme, which is still run to this day.

In 2015, Black Stallion would begin campaigning on the Iron Warrior chassis with Matt Cody driving, as Vaters’ chassis would be run as Monster Mutt Rottweiler.

In 2016, Black Stallion celebrated its thirty-fifth anniversary.  Vaters competed in the Fox Sports 1 Championship Series, while Cody continued to campaign the name in select shows for the remainder of the season.

In 2019, Black Stallion competed in Monster Jam Stadium Championship Series 3.  At that time, Vaters would share driving duties with former Bad Habit driver Joe Sylvester.  Vaters would resume driving the truck part-way through the series due to sponsor obligations, and Sylvester would go on to revive Bad Habit in November.  Meanwhile, a replica of the original Black Stallion would be constructed and displayed at the International Monster Truck Hall of Fame on the Iron Warrior chassis.

In 2020, Black Stallion competed in Monster Jam Stadium Championship Series Red with Daron Basl driving.  After the series would abruptly end in March due to the COVID-19 pandemic, Vaters would resume driving the truck in select shows throughout the remainder of the season. Matt Cody would drive the truck for one event in Hagerstown in 2021, after his truck had mechanical issues. 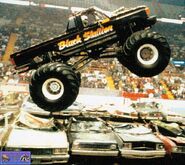 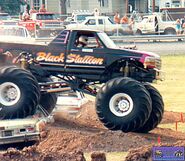 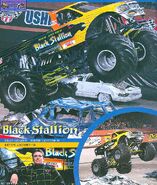 Before being signed by fans 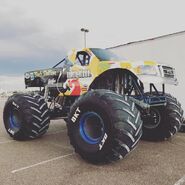 Black Stallion in 2014 with blue wheels

The 35th Anniversary body without the red front

On Higher Education in 2015

Black Stallion at the Monroe County Fair on July 29th, 2019

Black Stallion, running as the base for Monster Jam (Truck)