Bigfoot is a monster truck owned by Bob Chandler out of St. Louis, Missouri. It is considered to be the first "monster truck", though some were built before its time.

It is arguably the most iconic and recognizable monster truck of all time, followed by trucks like Grave Digger and Maximum Destruction (Max-D). However, unlike those two trucks, Bigfoot hasn't competed in a Monster Jam event since 1998, due to disputes between both companies.

There are currently 5 competing Bigfoot trucks with 6 full time drivers and 2 fill-ins. 20 trucks have been created by the team since its debut in 1975.

Bigfoot trucks are also known for running multiple colorful and creative paint schemes on their trucks throughout its career. These bodies are accompanied by the teams many sponsorships from different platforms.

The truck has achieved large amounts of success through the years. Some of these include Guinness World Records and championships from multiple leagues. Rather than favoring one or two promotions, Bigfoot is known to compete all over North America and appear all over the world.

In 1975, Bob Chandler opened the Midwest Four-Wheel Drive Center shop after being frustrated with getting parts and service for his year-old Ford 4x4 pickup truck. He used the truck as both a service vehicle and advertisement for the shop, racing it often on weekends, and upgrading it many times to be competitive.

In 1979, he fully rebuilt the pickup to have four-wheel steering and 48-inch tires using axels from a military truck, with updated body panels from a 1979 Ford. Dubbed "Bigfoot", Chandler began doing paid events and quickly became a common sight at truck and tractor pulls.

In 1981, Bigfoot received much attention from a car crush at the Pontiac Silverdome. This kickstarted Bigfoot's fame among other monster trucks.

In 1982, Bigfoot 2 was created by demand after multiple bookings were happening due to the truck's rising popularity. This truck was also the first Bigfoot to incorporate the today standard 66" Terra tires. Jim Kramer and Ken Koelling start driving for the team.

In 1984, Bigfoot 3 was introduced. It performed more car crushes for the team. Ron Bachmann also made his Bigfoot debut.

In 1985, Bigfoot 4 debuted. It was one of the most successful Bigfoot trucks from its time. It won multiple events and dominated the emerging monster truck racing scene through much of the late 80s. Andy Brass also joined the team.

In 1986, the team debuted Bigfoot 5, an exhibition truck which featured 10 foot tall tires. The truck was unlike any other monster truck from its period due to its height and heavy weight. It is also Team Bigfoot's first ride truck to be used.

In 1987, the team set another world record for the longest jump inside a monster truck. Jim Kramer drove the newly finished Bigfoot 6 onto the team's second world record. Gene Patterson also joined the team.

In 1988, Bigfoot 7 was introduced. It was built for a film shoot and was eventually used for competition.

In 1989, another first was recorded yet again by the team. Bigfoot 8 debuted and was the first monster truck designed to run a custom steel-tube-frame chassis rather than a reinforced standard truck chassis. Dan Runte and John Piant would also start driving for the team.

In 1990, Bigfoot 2 and 3 stopped competing and were turned into ride trucks. Bigfoot 9 debuted as a near clone of #8 as it featured almost the same design. Bigfoot 8 would be temporarily banned from TNT Motorsports due to it's extreme technological advantage over almost all other trucks on the circuit.

In 1991, Bigfoot created the first 3D-bodied monster truck Snake Bite. The truck ran on various Bigfoot chassis and served as the teammate to the team.

In 1992, the newly completed Bigfoot 10 won the second Special Events/Penda Points Series under Andy Brass. The team also expanded as Lonny Childress, Eric Tack and Brian Conn all started to drive for team Bigfoot. Bigfoot 11 made its debut at the SEMA trade show in November.

In 1993, Sky Hartley and Eric Meagher were hired by the team. Three brand new trucks were introduced as well. Andy Brass driving Bigfoot 11 won the PENDA Points Series under the name Wildfoot; the name was used as the series allowed only one truck to use the same name, and the team also had Bigfoot 10 competing. Bigfoot 12, a dedicated display truck, and Bigfoot 14 also debuted that year.

In 1994, Brass, Patterson and Conn finished their final seasons with Bigfoot. Bigfoot 6 was also retired. Bigfoot 15 made its competition debut. Brass would win his third PENDA Points Series Championship with Bigfoot 11.

In 1996, Runte won another PENDA Championship with Bigfoot 14.

In 1997, the team would win yet another PENDA Points Series this time with Eric Meagher driving Bigfoot 15. Gene Patterson also returned to driving Bigfoot.

In 1998, Eric and #15 won the USA Motorsports Monster Truck Challenge. Meanwhile, while on tour in Brazil, Bigfoot 9 was seized by customs. It was never returned to the team. This was also the last year Bigfoot ever competed at a Monster Jam event, the final event being in Stafford Springs, CT.

In 2000, Eric Tack won the ProMT series with Bigfoot 15. Teammates Gene Patterson and Sky Hartley left the team. Bigfoot 3 was also retired and was eventually sold.

In 2002, Bigfoot 5 was inducted into the Guinness Book Of World Records as the tallest and widest pickup truck, a record which remains to this date. Dan Runte won the NLMTC Grand Nationals once again in #14. Eric Tack won Monster Truck Nationals Championship in #15. Ken Koelling retired from racing.

In 2003, Larry Swim and Keith Sturgeon started driving Bigfoot. Nigel Morris also joined the team as he debuted his own truck, Bigfoot 17, the first official Bigfoot truck to exclusively tour in Europe. This truck also got him the same year's European ProMT Championship. Back in the US, Runte won another NLMTC, this time taking home the Winter Series Championship. Bigfoot 8 was retired from competition and became a display truck. Eric Tack officially left the team. Bigfoot competes at its final USHRA-sanctioned event and its first for USHRA in five years, being the Ford 100th Anniversary event.

In 2005, The team celebrated its 30th anniversary with a 1980's-inspired paint scheme on Dan Runte's Bigfoot. Also, AJ Straatmann drove Bigfoot for a couple months.

In 2006, Keith Sturgeon stopped driving for Bigfoot. Morris won the EMRTC with #17.

In 2007, multiple achievements were received by the team. Straatman joined the team full time. They unveiled Bigfoot 16 which won the MLMT Series under Runte. He would also take #15 to another NLMTC Winter Series win. Morris would again win the EMRTC in Europe with #17 and Rick Long in #15 won the the Monster Madness tour in Canada. Dave Harkey retired from racing. Bigfoot #4 was sold.

In 2008, Darron Schnell was hired by the team. Later that year, former driver Dave Harkey tragically died at the age of 49.

In 2009, Straatmann left the team. Larry Swim won both the Racing and Freestyle championships of the Checkered Flag Productions Series with Bigfoot 14. In Europe, Morris won another EMRTC with #17.

In 2010, Amber Walker began driving for the team using the Ms. Bigfoot body design. Swim won another Checkered Flag Productions Championship with #14. Rick Long won the racing championship of the Monster Truck Nationals with #15. Eric Tack won freestyle in the Domination in the Dome event at Pontiac, Michigan with #11.

In 2012, Bigfoot 18 debuts. Runte later won the Toughest Monster Truck Tour with #18. Later that year he piloted it to reclaim the monster truck long-jump record. Rick Long also took home his third Monster Truck Nationals Racing Championship with #15 as well as Larry Swim winning the Winter Series of the Checkered Flag Productions with Bigfoot 16. However, #16 was later retired after a hard crash damaged major components of the truck. Bigfoot 19 was quickly inaugurated as a replacement.

In 2014, AJ Straatman rejoined the team once again. Runte won another TMTT with #18 while Swim won the Monster X Tour with #19.

In 2015, Bigfoot 10 and 11 were both retired due to extensive frame damage. Bigfoot 21 was then welcomed to the fleet. It won Runte's fourth consecutive TMTT Championship while Swim won both Monster X and the 4 Wheel Jamboree Racing Championship with #18.

In 2017, Josh Gibson and Bigfoot 18 won 3 different championships. He won the Racing and Freestyle Championships of the 4 Wheel Jamboree as well as the TMTT as Snake Bite driver Vinny Venom. Darron Schell also won the Monster Truck Nationals racing championship with Bigfoot 19.

In 2019, Bigfoot 18, as Hot Wheels Racing 1 with Norman driving, alongside other Bigfoot trucks begin on the Hot Wheels tour. Swim won another TMTT Championship with Bigfoot 21. Swim retired in June. Soon after, Buddy Tompkins is hired as a new driver for the team, but only for select shows.

Bigfoot's first sponsorship was Ford, which ran on the truck from 1986 to 2007. Since then, multiple companies have sponsored Bigfoot 4x4 due to its fame and popularity in the industry. The following list is a record of all of Bigfoot's sponsorship bodies through the years.

In 1995, Team Bigfoot partnered with WCW to create monster trucks inspired by wrestling icons at the time. The sponsorship lasted until 1998 and WCW moved to Monster Jam a year later.

Aside from the Ford 100th Anniversary event in 2003, Bigfoot has not competed in a USHRA-sanctioned event since the summer of 1998. This is due to a falling-out between Bigfoot and Pace Motorsports/Monster Jam that took place over the course of multiple years in the mid-late 90's. The main reasons for the falling out were disputes over pay for appearances at USHRA events, Bigfoot wanting to film their own trucks at USHRA events and have full ownership over the footage, and Monster Jam's attempt to buy the team in the same way they would buy Grave Digger in 1999. By the spring of 1998, all of these issues led to months of debating and negotiating as to what Bigfoot's future with Monster Jam would look like, but no agreements were met and both parties parted ways for good by the end of the summer.

Despite the lack of a professional relationship, this does not necessarily mean that there is animosity between all those involved with both parties. Monster Jam-owned trucks have made pit stops at the Bigfoot compound for repairs and maintenance, and shots of Bigfoot have occasionally made their way onto Monster Jam programming or at live events. That being said, both sides go out of their way to not include each other's trucks in their videos/broadcasts as much as possible for the purposes of not paying royalties. In hindsight, Bob Chandler has stated that he most likely would not have left if he had to make the decision over again, and Bigfoot has since made multiple attempts to reconnect professionally with Monster Jam, albeit without much mutual interest.

There have been 20 Bigfoot trucks built over the years. Bigfoot 21 is the latest truck, but there is no Bigfoot 13 due to superstition. 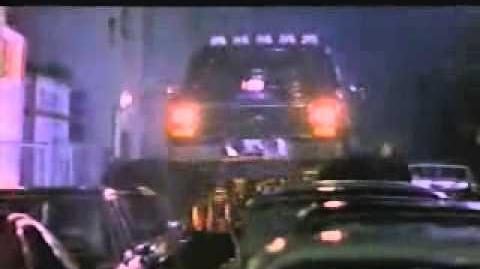 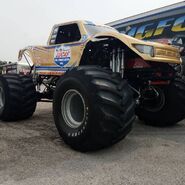 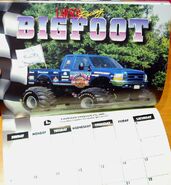 Ditto, but in a unknown USHRA event 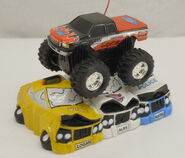 Bigfoot 19 with its second body design for the Hot Wheels Live Monster Truck Tour in 2019.

Bigfoot at a 4-Wheel & Offroad Jamboree circa 1984 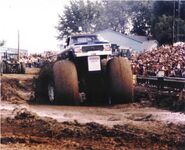 Hotwheels Bigfoot in 2021
Community content is available under CC-BY-SA unless otherwise noted.
Advertisement