Bearly Tame is a 1995 Ford F-150 monster truck formerly owned by Zane Rettew of Rettew Motorsports from Lancaster, PA. It is based on the original truck of the same name.

Bearly Tame originally debuted in 2020, with Joe Lockhart behind the wheel. At the time of its debut, the truck was originally run on fourth Stinger Unleashed chassis.

In 2021, Bearly Tame received a new Cohen chassis, which was previously also used for Stinger Unleashed. The original chassis would be rebuilt and converted into Master of Disaster, the truck that also happened to be the original teammate for the original Bearly Tame. Later in August, Matt Boyer took over the driving duties. That same month, the truck, along with Master of Disaster, would be sold to James Trantina III. Despite being sold, Leon Hostetter drives the truck through the end of the 2021 Renegade Monster Truck season. 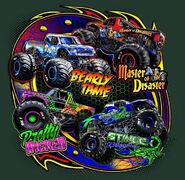