Bad Habit Relapse, originally known simply as Bad Habit, is a Jeep Gladiator monster truck owned and driven by Joe Sylvester out of Canton, Ohio. Since its debut in 2006, the truck has become one of the most successful independently-owned monster trucks in the industry, setting records for the longest distance jumped, and winning several championships. Although Bad Habit was originally retired in 2014 after Sylvester moved to full-time competition on the CORR circuit, the truck was revived in 2019, and still competes to this day.

Bad Habit was originally created in 2006 when Joe Sylvester purchased the Carolina Crusher truck from Tim Tesmer. At the time of the truck’s debut, it featured an orange and purple paint scheme.

A brand-new chassis was constructed by Sylvester for Bad Habit in 2009 to replace the original one. In the following year, Bad Habit received a brand new design, featuring a Cadillac Escalade pickup body style. That same year, Sylvester and the truck would set a new world record for the longest distance jumped in a monster truck, at 208ft.

Bad Habit received a new black paint scheme for the 2011 season. The following year, a brand-new design debuted on Bad Habit, featuring a Cadillac Escalade body style, along with a black paint scheme with orange flames running across the side panels.

In 2013, Sylvester and Bad Habit would be invited to compete in the Young Guns Shootout at Monster Jam World Finals XIV. They would go on to win the Young Guns Shootout Championship, defeating Morgan Kane in Iron Man, and earning the twenty-eighth and final spot in the main field. Later, Sylvester would set another new record for the longest jump, this time at 237ft. During the record, Bad Habit would campaign a special Dodge Van body style. The truck would also campaign a Le Roi Du Camion-sponsored design for a single show in Quebec, featuring a Ford F-150 body style with a bed cab.

Due to a busy schedule with both monster trucks and CORR Racing, Sylvester would briefly drive Bad Habit under 2Xtreme Racing for the 2014 season. For that occasion, the truck received a 2005 Ford Expedition body style - which was campaigned by all 2Xtreme Racing trucks at the time - and would also be campaigned on the old Scarlet Bandit chassis. Sylvester and the truck would later be invited to compete in Monster Jam World Finals XV. Afterward, he would retire from driving monster trucks full-time and focus more on CORR Racing. Meanwhile, the second Bad Habit chassis would be acquired by Badlands Racing and converted into Quad Chaos.

Bad Habit would remain absent from competition for five years until 2019 when a brand-new Bad Habit was built and officially rebranded as Bad Habit Relapse. This truck would be first unveiled to the public at SEMA 2019 that November in Las Vegas, Nevada.

Following extensive body damage throughout the 2022 summer season Joe switched the original Ford body for a new Jeep Gladiator style body that debuted on July 28th 2022. He attempted to break Bryce Kenny's speed record of 100.3 MPH, which he did, establishing a new speed of 101.84 MPH.

The original Bad Habit, circa 2006 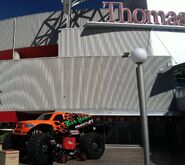 Bad Habit competing against Screamin' Demon (Both trucks would eventually be purchased by Badlands Racing), circa 2013

Bad Habit under 2Xtreme Racing, circa 2014

Bad Habit after being acquired by Badlands Racing

Bad Habit Relapse at its official competition debut, circa 2020 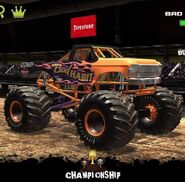