Backdraft is a custom fire engine monster truck owned and driven by Paul Breaud of Xtreme Monster Sports, Inc. out of Pennsylvania. The truck was originally created by Rick Disharoon in 2000, who operated the truck until 2005, when it was sold to Andy Slifko. Slifko would become the most well-known owner of Backdraft, as his son Jeremy drove the truck from 2008 until 2013, when it was sold to Xtreme Monster Sports, Inc, who continues to operate the truck to this day. As of 2021, a second Backdraft is currently used by the team, with Ty Cornelius Jr. driving.

Backdraft originally debuted in 2000 at Mesa, Arizona with Rick Disharoon behind the wheel. At the time of its debut, the truck featured a Dodge Dakota body style, which was used by the truck until 2003, when Backdraft received a new body style, being a custom Dodge Fire Engine.

For the 2004 season, Backdraft would be displayed on Rich Blackburne’s Demon chassis on several occasions. Mid-way through the season, Disharoon stepped away from driving and decided to sell the truck, as his son Ryan was too young to take over the driving duties.

After Disharoon sold the truck, it would eventually be purchased by Andy Slifko out of Pennsylvania, with Jon Zimmer taking over the driving duties. At the start of the 2005 season, Backdraft received a new chassis, being the previous Eradicator. The previous chassis would be sold to Steve Sims, and converted into Stone Crusher.

Backdraft received a new black paint scheme for the 2007 season, featuring orange flames on the side panels. Zimmer continued to drive the truck until the following year, when he left the team to drive for Sudden Impact Racing. John Killenger would then serve as Backdraft's driver for the remainder of the 2007 season and going into 2008. At this time, Andy’s son, Jeremy Slifko began the driving duties.

In 2009, Backdraft received a new custom Ram Fire Engine body style. An updated design would be first used in the following year, featuring additional details. 2011 would mark Slifko and Backdraft’s breakout season in Monster Jam, as they won their first major freestyle championship in Orlando. Both truck and driver would be invited to compete in Monster Jam World Finals XII. For that occasion, a new white paint scheme would debut, which would also be used exclusively for Slifko’s hometown event in Philadelphia in June.

Backdraft received a major update for the 2013 season, featuring a new international fire engine body style and a new J&B chassis. That year would also be Slifko’s final year of competition, as he would retire from driving afterwards.

After the Slifko family sold Backdraft, the truck, along with its previous chassis, would be purchased by Paul Breaud of Xtreme Monster Sports, Inc. the following year. Following the purchase, Ty Cornelius took over the driving duties.

In 2016, Backdraft would receive a new paint scheme, featuring flames on the side panels. Meanwhile, the previous chassis would receive modifications and be converted into the General Hazzard race truck. Cornelius continued driving the truck until his retirement due to a chronic back illness two years later. Breaud took over the driving duties afterwards.

In 2021, a second Backdraft would be added to the team as a tribute to the September 11 attacks. The second truck featured a black paint scheme on the previous Dodge Ram body style. It would also be used on the previous chassis, with Cornelius’ son, Ty Cornelius Jr. driving. Breaud would continue to drive the current version of Backdraft.

The original Backdraft, circa 2000

Backdraft without the flame decals

Backdraft on the Screamin' Demon chassis

Backdraft on the Sandman chassis

Backdraft on display on the Viper/Demon chassis, circa late 2003-early 2004

Backdraft competing on the Demon chassis

Backdraft with the old design on the Eradicator chassis, circa fall 2004

Backdraft under Jeremy Slifko, circa 2007-08

The final incarnation of Backdraft under the Slifko family, circa 2013 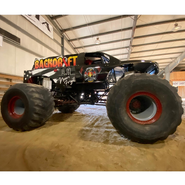