“Kickstart My Heart” by Mötley Crüe

Advance Auto Parts Grinder (Otherwise known simply as Grinder) was a 2008 Ford F-150 monster truck owned by FELD Motorsports and sponsored by Advance Auto Parts. It was driven by Lupe Soza, Frank Krmel, and John Seasock. Following its creation in 2009, Grinder served as the sponsor truck for Advance Auto Parts during the company's time as title sponsor of Monster Jam until its retirement by the end of the 2013 season. The truck was also a fan favorite in the league, having competed in four Monster Jam World Finals events.

In 2009, Advance Auto Parts became the title sponsor of Monster Jam, which led to the creation of Grinder. The truck made its official debut on December 5 of that year in Minneapolis, Minnesota with Lupe Soza behind the wheel. During its debut event, Soza and the truck would be eliminated in the Semi-Final Round of Racing by Dennis Anderson in Grave Digger and finished fifth in Freestyle.

Grinder entered its first full year of competition in 2010. The truck would go on to have a strong debut season under Soza, resulting in both truck and driver being invited to compete in Monster Jam World Finals XI. During the event, Soza and Grinder would be eliminated in Round One of Racing by Pablo Huffaker in Teenage Mutant Ninja Turtles and finished fifth in Freestyle.

The Grinder team expanded to three trucks by the start of the 2011 season, as Frank Krmel and John Seasock joined the team. The former of the two would later win the racing competition in Atlanta against Dennis Anderson in Grave Digger, ending Anderson's racing championship streak. Krmel, along with Soza, would later be invited to compete in Monster Jam World Finals XII, with Krmel driving the truck in Racing and Soza driving in Freestyle. Both drivers, along with Seasock, would also perform a triple freestyle performance as an encore for the said event.

Krmel would suffer an injury prior to the start of the 2012 season. As a result, Tasmanian Devil driver Nicole Johnson would drive Krmel's truck in his place for the first quarter. Johnson and Grinder would later be invited to compete in the inaugural Young Guns Shootout at Monster Jam World Finals XII, where they would make it all the way to the Championship Round only to lose to Bari Musawwir in Spider-Man. Meanwhile, Soza and Seasock would be invited to compete in the main field of the World Finals, with Seasock driving the truck in Racing and Soza driving in Freestyle. Following the World Finals, Seasock would in his first-ever stadium freestyle championship in Philadelphia during the inaugural Path of Destruction Tour.

2013 marked Grinder's final year of competition, as Advance Auto Parts would step down as the title sponsor of Monster Jam. The truck's final show would be held on December 7 of that year at the final event at the Hubert H. Humphrey Metrodome in Minneapolis, with Soza driving. Afterward, Grinder would be retired, and all three drivers would move to different teams. Soza would go on to rejoin the El Toro Loco team, with Seasock returning to drive Batman. As for Krmel, he would become the new driver for the recently-introduced Fox Sports 1 Cleatus.

Alternate Grinder design (minus the shading) 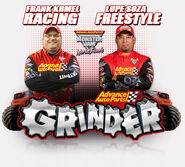 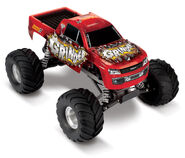 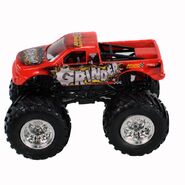 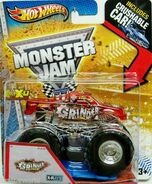 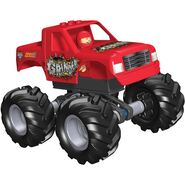